BY the 21st Lumsden Cup in 2015, the trophy had visited a huge portion of the county, but not to Naas.

Teams from the county town had gone close, Kingstown lost in the 1999 final, Ballycane Celtic were beaten in the 2005 final and Naas Utd were edged out by Coill Dubh in 2011 but despite the quality of the teams in the town there had yet to be a winner.

If that was to change then Naas Utd looked the most likely to do so. They won the Senior Division in 2012, only missed out on a play off in 2013 and won again in 2014.

After losing in the 2014 semi-finals, they made it to their second Lumsden Cup final by seeing off Woodstock Celts in the last four.

There was a chance of a Naas derby in the final when Naas Utd were kept away from Ballycane Celtic in the semi-finals but it was Liffey Celtic who won through, becoming the first side to reach three successive finals in the process.

It was actually Liffey’s sixth final in ten years and having lost on their previous four visits there was no doubting their determination, or their quality. This was a top class Liffey side and a few weeks later they beat Naas in a decisive game to win their first Senior Division league title since 2011.

But this was the Lumsden Cup and unfortunately for Liffey they found themselves on the wrong end of the result once again.

Two of the best teams in the league kicked out in Mullarney Park and the only goal of the game came on the half hour mark. Dean Fennessy’s clever flick sent Paul Omoteso away and the powerful striker controlled the ball well before firing low past Ian McDonnell in the Liffey goal.

Naas could have made it 2-0 before the half time break when Conor Coady went around McDonnell but his touch forced him a little wide and he could only find the side netting with his shot.

The second half involved a lot of huffing and puffing from Liffey but they came up against a defence well marshalled by 39-year-old Eoin Giblin, the Naas player/manager. In front of the defence was Naas captain David O’Connell and he was named man of the match for his performance in midfield.

The closest that Liffey came to an equaliser was late on when Stephen Reidy headed just past the post.

Referee John Dwane, in his fourth and final Lumsden Cup, showed a red card to Naas striker Conor Coady in the closing stages but that didn’t take away from Naas’ joy when the final whistle blew.

O’Connell lifted the cup to huge cheers from the Naas contingent and the cup was on the way to the county town for the first time. 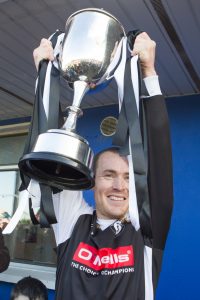 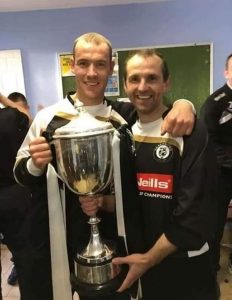 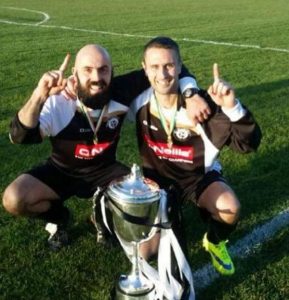 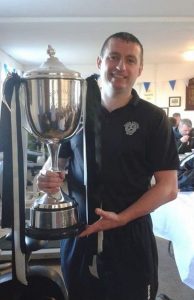 A veteran of some of Naas Utd’s best days, Stephen Burke

Liffey lost another final a couple of weeks later when they were beaten by Woodstock Celts in the Senior Cup Final but they got their revenge on Naas by pipping them to the league title.

Liffey were back in the final for a fourth successive year in 2016 and their clash with Castle Villa turned out to another memorable classic. We’ll be looking back on that game tomorrow.