EVEN before the 2016 Lumsden Cup, Castle Villa and Liffey Celtic held the record for six final appearances and the two sides won through to meet each other in the decider and extend that record to seven.

For Liffey, they were also extending their record by qualifying for their fourth successive final. The Newbridge team had many excellent seasons in the Kildare League but this was arguably their best.

They had already retained their Senior Division title by the time they exorcised some of their Lumsden Cup demons by gaining some sort of revenge on Bridgewood Celtic in the semi-final. The following week, they went behind to Suncroft with five minutes to go in the Senior Cup Final but scored twice in the closing stages to put them in touching distance of an unprecedented treble.

They faced off against a Castle Villa side who struggled in the bottom of the league for most of the season but they showed once again that they are a side who can raise their game in the cups and they knocked out holders Naas Utd in the semi-finals.

For the first time, the final was played in Cusack Park, home of Coill Dubh, and the game turned into yet another dramatic chapter in the story of the competition.

It took Villa just six minutes to open the scoring when Graham McCormack, played in his fifth final for Liffey, sliced Roy Byrne’s cross into his own net. 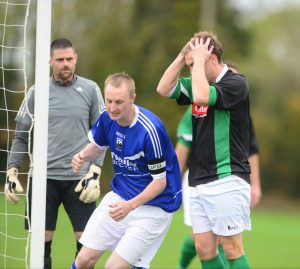 Graham McCormack has his head in his hands after his own goal gave Castle Villa an early lead
Photo: Adrian Melia

The main talking point of the game arrived on the half hour mark when Villa’s veteran goalkeeper Alan Proctor was tempted from his line to try reach David O’Connor’s through ball. Liffey striker Trevor Connolly got there first though and Proctor sent him tumbling. This was Proctor’s sixth Lumden Cup final, a record that has been matched but not bettered, but it was short lived after referee Eddie Sullivan was left with no choice but to show him a red card.

Villa elected to give the goalkeeper jersey to Timmy Doyle. With three Lumsden Cup goals in previous to his name, Doyle had already ensured his place in Lumsden Cup folklore but he emphasised that by brilliantly turning Dan Connolly’s spot kick around the post. 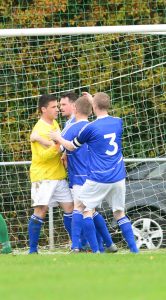 Castle Villa stand in goalkeeper, Timmy Doyle, is congratulated after saving a penalty with his first touch
Photo: Adrian Melia

Still, there was an hour of football to play and Liffey had an extra man but Villa defended brilliantly. Captain Alan Hickey led their defence and they used Martin Farrell, whose father of the same name won the cup with Villa in 2000, well in a long striker role.

Liffey lost striker Dan Connolly to injury in the second half but still had plenty of scoring threat in their team. Try as they might, they just could not break through that Villa defence and any time they did they found Doyle in inspired form between the posts.

As time ticked on, Liffey ‘keeper McDonnell came way out of his goal to try spark one last attack but miscued his clearance straight to Roy Byrne who then gleefully clipped the ball into the empty net from 45 yards, sparking huge celebrations for Villa as they claimed a record fourth title. 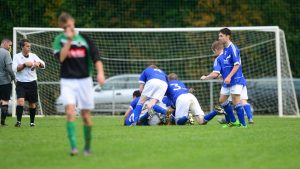 Despite Proctor’s unfortunate early exit he  also created a record by playing in all four of those winning finals, and his replacement in goal was named as the man of the match. This final summed up much of Villa’s fighting spirit and ability to grind out results even in the face of adversity and their determination shone through even when down to ten men. 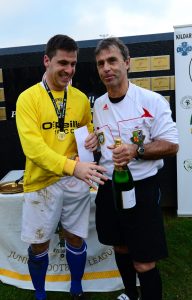 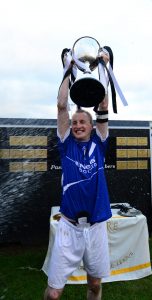 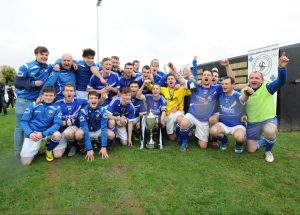 It was tough on Liffey but their achievement of reaching four finals in a row, all under the management of Fergal Finn, himself a winner of the competition as a player, should not be overlooked. They have some bad memories of some heartbreaking and bizarre final losses but they were one of the strongest teams in the county for a long period.

Tomorrow, we look back at a hugely anticipated decider in 2017 between the two best teams in the league that season but one that ended as the competition’s most one side final.