THE 2017 Lumsden Cup Final had all the ingredients to be a cracker but instead turned into the most one sided final in the competition’s history.

Suncroft and Caragh Celtic had been involved in a fascinating title race that went right down to the wire and they were by a distance the two best teams in the league that season.

Both teams had been scoring freely and a closely fought game was fully expected but the final was a day when everything clicked for Suncroft and nothing went right for Caragh.

Things began going wrong for Caragh even before the start of the game. Paddy Woodgate and Alan Igoe had been key features of Dicky Nolan’s team throughout the season but they were unavailable due to a clash with their GAA commitments with Raheens. Then, shortly before kick off they found out that regular goalkeeper Robbie Hannon wouldn’t be able to play and youngster Barry Cassidy had to take over between the posts.

But even if Caragh were at full strength they would have found it difficult against a Suncroft side that had targetted this competition from the moment that it was announced they would host the final for the first time since 2002.

The club did fantastic job in the way that they presented the final for the large crowd in attendance and their team did the business on the pitch.

Captain Ray Coleman was the only survivor left from the last time that Suncroft won the competition in 2001 and he drove his team on from defence.

In truth though, Coleman had little to do from a defensive point of view as Suncroft dominated the game. Mikey O’Toole and particularly Gary Connolly were in top form in midfield and as they pinned Caragh into their own half it was only a matter of time before they opened the scoring.

Kilbey had the ball in the net but his effort was ruled out in the 44th minute but there was still time left in the half for Bennett to score his second and Suncroft’s third.

Dean Bowers had been part of the Eleson Utd team that turned around a 3-0 half time deficit in 2014 but when he was sent off early in the second half, any slim chance Caragh had of a similar comeback went with him.

Darren Kilbey was part of that Liffey Celtic side shocked by Eleson, and had actually lost the previous four finals, so there was a little extra bit of joy in his celebration when he made it 4-0 on the hour mark. Goalkeeper Kevin McDonnell was another enjoying the day after losing three finals with Liffey. 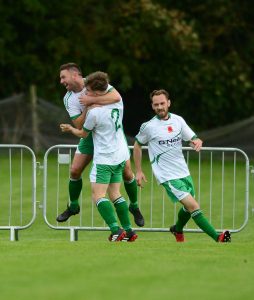 Caragh were reduced to nine men with 17 minutes to go when Stephen French was shown a second yellow card and Suncroft were given the chance to round off the perfect day when Dylan Connolly was fouled inside the area late in the game.

Ray Coleman had scored in the penalty shoot out in Suncroft’s 2001 win and he stepped up here to round off a thumping 5-0 win, the only final decided by more than two goals. 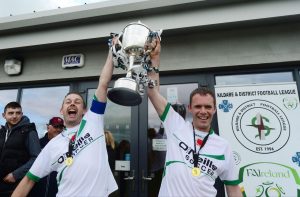 The day was far from a fair reflection on how good Caragh were that season and they gained revenge against Suncroft the following week when they beat them in the Senior Cup semi-final, but they went on to lose the final to Kildare Town.

An unwanted treble of being the only side to finish runners up in the three biggest KDFL competitions was completed when a Kilbey inspired Suncroft won the title deciding game in Donore as Suncroft became the first since Castle Villa in 1999/2000 to win the top division league title and Lumsden Cup.

Richard Reid, part of the management along with Neil Barnby, said after the game:

“The lads were fired up and wanted it a hell of a lot. It’s too long that this club hasn’t been at this stage. At the start of the year we wanted it and then we heard that the league had picked the club for the venue for the final and it just lit a fire under us. We started on the front foot and just kept going like that.

“There were some super goals, they were clinical. It could have been a different game either way but we got our chances and took them when they came along.”

“I thought we very good in the first half, very solid and we maybe demoralised Caragh a little bit because we were so on top, it’s just great to get the win. It’s my seventh final and I’ve lost the six previous ones so it was about time I won one. I was starting to think I was jinxed, it’s good to win and good to win the big one,” said Connolly. 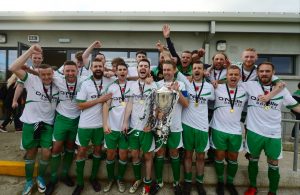 Sadly, this was the last final covered by legendary local photographer Adrian Melia. Just a month after this final, Adrian lost his brave fight against cancer. He was very weak and poorly at the time of this game but was determined to cover what was always one of the highlights of his working year. Adrian covered the first final back in 1995 and didn’t miss one up until his death. His memory lives on in the fantastic pictures he took of momentous occasions like these Lumsden Cup finals.