KILDARE legend Johnny Doyle has reiterated his opinion that it was a huge mistake to remove Kieran McGeeney from his post as manager in 2013.

The Armagh All-Ireland winner spent six years in the county and established Kildare as one of the best teams in the country but his spell in charge was brought to an end following a county board meeting after his sixth year in charge.

“Sometimes the GAA is as political as any political party and the fact that it went to a vote…The executive was divided, it was messy and it should never have come to that, in my opinion. Here we are, seven years later and I’m still very strong in that opinion,” Doyle told the Inside the White Line podcast.

The Allenwood man has never been shy in displaying his admiration for McGeeney and he described him as a ‘players’ manager’. 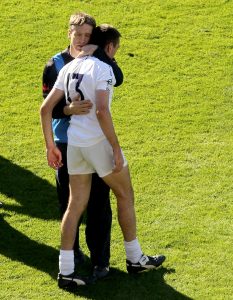 “He was very passionate about what he wanted to do. Simple things that people don’t see, he got he got his backroom team together and the first thing he said was that everyone of us had to be member of Club Kildare, just to say that we were all in this together.

“There was little things he did for players on a personal level, he was a real players’ manager and players appreciated that. I remember one stage in 2010 he rang me and he told me that I wasn’t enjoying it at that moment. I was cross with myself because I wasn’t playing well at that time and I getting cross with everyone else too. He told me to take the weekend off, head down to Cork where some friend of his had a hotel, bring Siobhan, relax and have a few beers.

“He’d always say don’t be too hard on yourself, I was captain of the team for four or five years and was probably trying to take too much on, he’d always tell me that all I can do is look after my own game.”

Doyle appreciated McGeeney’s professionalism and ability to think outside the box to give Kildare that extra edge.

“We did a trip to San Francisco, raised a few bob ourselves, at that time we got a grant from the GPA and to a man everyone threw their grant into the pot and we did a bit of fund raising and we went to San Francisco. We a few nights in New York when we stayed in bars too late and then had ten days in San Francisco and of those ten days we trained like dogs for six of them. He had a friend of his over there and he got us the use of a college running track, he brought us down to these sand dunes and it was the hardest training I’ve ever done. At one stage we thought Andriú MacLochlainn was dead, he ran us that hard.

“In 2011, we went to Boston for a few days after we’d fund raised the money ourselves, we went to a training camp in Portugal, stuff we’d never done.”

Ultimately, although Kildare were probably in top four teams in the country for much of McGeeney’s time here, they didn’t win any silverware under his management and that for Doyle is his biggest regret.

“The biggest regret I have is that we didn’t win anything, didn’t win a Leinster, we came close to reaching an All-Ireland final, and that was probably the stick that people used to beat him. Along with all the other stuff about the Arabs supposedly giving him a load of money and all that shite talk that goes with it.

“He was a fantastic manager and a fantastic guy and I was lucky to learn a lot under him.

Among the various difficult defeats under McGeeney, the loss to Donegal in the 2011 All-Ireland quarter-final was the hardest to take. 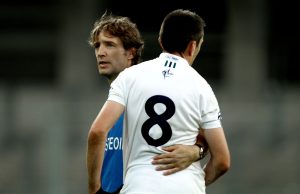 The loss to Donegal in the 2011 All-Ireland quarter-final was the toughest for Doyle to take
Photo:©INPHO/James Crombie

“The next week was probably the hardest week I’ve had as a player. It just took so much out of me, emotionally. I’m a happy go lucky fella and it’s just a game a football but I actually was depressed. I didn’t go out, I didn’t want to talk to anyone. I didn’t want to look at the match. I probably knew, I was 34 heading for 35 and it was starting to get towards time to retire. Donegal went on and won an All-Ireland and we regressed, that’s the joys of it,” said.

Doyle covers a wide range of subjects in the podcast along with Laois midfielder Padraig Clancy and host Tomas Moore and is well worth a listen for Johnny Doyle fans and all Kildare GAA supporters, link here.