10 years ago today, Ballykelly opened their wonderful new facility, Stephen O’Rourke Park. Look back at Ger McNally’s report and some of the pictures from that occasion. 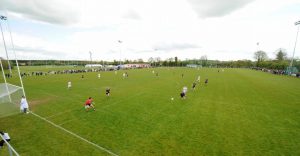 The view from above of Ballykelly’s new pitch during Kildare against Sligo at the official opening of Stephen O’Rourke Park, Ballykelly.
Photo: Adrian Melia

The opening of the Aviva Stadium on Friday may have caught national attention but there was only one opening ceremony that mattered this weekend in Kildare.

They may have been in use since last October but Stephen O’Rourke Memorial Park, the new home of Ballykelly, officially opened its gates to the county over the weekend.

And if the Aviva Stadium marks a new departure for soccer and rugby then Ballykelly have broken with an ever greater GAA tradition – there are signposts to point you to their new home.

Coming down the freshly laid driveway feels like driving into a luxurious hotel rather than a football pitch.

For the club PRO, Dermot Lawler, his pride is all too evident as he gladly welcomes another guest and begins the guided tour.

Although the main pitch has taken a battering over the winter when the club became the unofficial home of the many county teams while Hawkfield is being refurbished it still looks in great nick. The other pitch at the back of the 17 acre site is home to the Ballykelly ladies – who lined up against Scottish visitors Dunedin Connollys on Saturday. 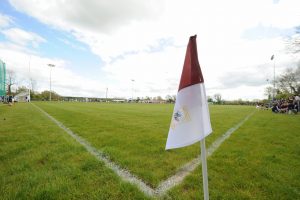 As well as the two grass pitches, there are two five-a-side Astroturf pitches while inside there are designated ladies and gents changing rooms, a physio room and a kitchen but pride of place is the sports hall.

It’s the little touches that make the place – the club crest tiled into the floor on the entrance for example. Inside the walls are decorated with photos of important people in Ballykelly’s history, since the club reformed in 1953.

One of the most famous players in Ballykelly’s history was Seamie Harrison, who was just a minor in 1953 when Ballykelly United, as they were called then, formed as a breakaway from the existing Monasterevan club.

Seamie was called up to the Kildare minor team in Ballykelly’s first year and three years later he scored seven points in the Leinster Final when Kildare beat Wexford 2-11 to 1-8.

To this day it is still the second highest total that a Kildare man has managed in a Leinster final, second only to Paul Doyle’s 1-5 tally in 1931.

Seamie is generally regarded as Ballykelly’s best player and even though he sadly passed away in 2003, his wife still has in her possession the ball he kicked all those scores with in the Leinster final and that was on the display in the hall for visitors on Sunday.

The club made an immediate impact after reforming and lifted the Junior B title in their first year back but the following year they were defeated by close neighbours Monasterevan in a legendary Junior A final. The story goes that a specially chartered train was run to Newbridge for the game with most of the town on board.

The club went on to win intermediate titles in 1955 and 1960 with the 1960 team guests of honour at half-time during Kildare’s challenge match with Sligo on Sunday. 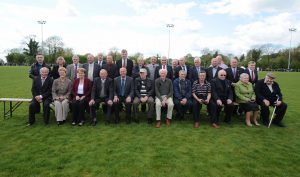 The Ballykelly intermediate championship winning team of 1960 were guests of honour at the opening
Photo: Adrian Melia

With the tour complete, Lawlor talks about Stephen O’Rourke, the man whose name the grounds will carry for ever more.

“It’s easy to be involved in a club on days like this but I suppose the real test of a man is how he acts when the chips are down and Stephen was the driving force behind the club when there weren’t many good days. You can’t praise a man much more than that,” says Lawlor.

There are many touching tributes to Stephen in the event programme with chairman John Behan noting that: “Football was not a matter of life and death to Stephen – it was more important than that.”

Once the club decided that the Old Grange pitch, bought in 1982, couldn’t hold the burgeoning club, a committee was put together which started the wheels in motion for a new development. 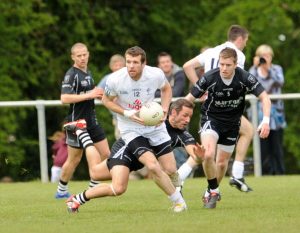 After sourcing a piece of land on the outskirts of the town in 2005, the Old Grange grounds were sold off while the country was still booming in 2007. With much of the work completed the recession, it allowed the club to add all the little extras.

“We sold in the boom and banked the money. It took us some time to get permission to build on the land which probably helped us because the price of everything fell during the recession and that is a major reason why we have what we have now because the initial spec wouldn’t be anything like what you see today,” says Lawlor.

“We had a brilliant building committee who treated the club’s money as if it was their own. There were given a remit to build the ground without the club incurring any debt and fair play to them, they managed to do that.”

I catch a bit of the Ballykelly ladies on their way to beating their Edinburgh rivals 4-18 to 1-06 but the men’s game that followed was a much tighter affair with the visitors coming out on top by 0-12 to 0-10.

Today the football is only a sideshow. Lawlor tells me that the grounds are a fitting testament to all the people who have put so much into the club over the years. 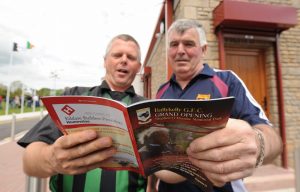 “Because we owed nothing to the bank it was our decision internally to sell the pitch which meant that it was a decision made by people acting on behalf of Ballykelly’s best interests and it also quickened the process. Great credit must go to those who bought and developed the old pitch back in 1982, we are just carrying on their work now. We paid people to do all the work here but back then all the work on the pitch was done voluntarily.”

Stephen O’Rourke would no doubt have been proud to look down on the progression in the club he worked so tirelessly to lift off the ground. 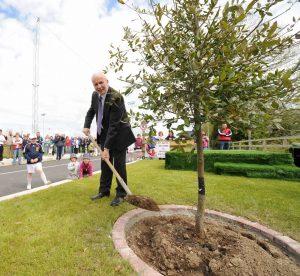