KILDARE’S Dennis ‘Hurricane’ Hogan has announced a change of coach and a new link up with Wayne ‘Pocket Rocket’ McCullough. 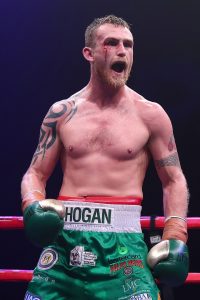 McCullough is one of Ireland’s most popular ever fighters and was a huge star in the ‘90s. A very successful amateur, he fought at the 1988 Olympics in Seoul and won a silver medal four years later in Barcelona before turning pro.

In 1995 he became a world champion when he defeated YasueiYakushiji for the WBC bantamweight title in Japan.

After three successful defences, including a fight in the Point Theatre in Dublin in 1996, McCullough lost his title to Daniel Zaragosa after a 12 round fight.

The Belfast man fought twice more for a world title before the end of the ‘90s, hugely entertaining fights when he brought Naseem Hamed and Erik Morales the full distance before losing on points.

He went on to fight for world titles on four more occasions in the early noughties before retiring as one of Ireland’s most decorated boxers.

Hogan himself has lost twice in world title fights in his last two fights and is clearly hoping that the link up with McCullough can be the final piece in the jigsaw to complete his dream of becoming champion of the world. He had excellent success under his previous coach, the Australian Glenn Rushton, and many believe he should got the decision to win the first of those two world title fights against Jaime Munguia in Mexico but as he now plans to be based in America the switch to McCullough makes sense.

In a statement on his Facebiook page, Hogan said:

“I am over the moon to confirm that Irish legend Wayne McCullough will be my coach moving forward.
As my next few fights will be in America and Ireland it makes sense to have my coach based there.
To say I’m over the moon is an understatement
Let’s go”

Exciting times ahead for the Hurricane.