‘Whatever needs to be done, we’ll do it and that’s it’ – Naas ready to host first Irish race meeting on 8 June

NAAS Racecourse held one of the last race meetings in Ireland on 23 March and the HRI announced over the weekend that the Kildare track will host the first meeting when racing resumes on 8 June.

Having already hosted one meeting behind closed doors, Naas Racecourse manager Eamonn McEvoy is delighted that his track will host the first meeting back, but moreso, he is just delighted to see the sport return. 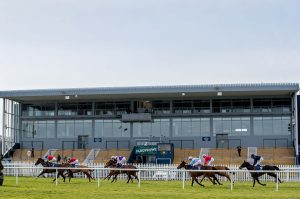 Racing behind closed doors will begin in Ireland on 8 June Photo: ©INPHO/Morgan Treacy

“To be honest, it didn’t really matter where it was as long as racing was starting again but we are delighted to have it here in Naas. We’ve done one meeting behind closed doors already so we have a good insight into how to get it done. I’m delighted that there was the change to bring it forward from the 28 June to 8 June because I think there would have been an awful lot of trainers in big, big trouble if they had to wait until then,” he said.

Successful meetings behind closed doors, like the one at Naas on 23 March, meant that horse racing had positioned themselves well to be one of the first sports to return.

“There’s just so much space at race tracks and 95% of the time at meetings people are outdoors. We’re very strict on our social spacing and we’ll be even better prepared this time around. We’ll have a one point entry system, there will be health screening for every person going to the track before they are admitted, there will be more social marking.

“The difference now is that everybody is aware of it now. Back in mid March things were changing by the day but now everyone is very much aware of it and I can’t see us having any problems because we have so much space. If trainer has a runner and that’s his only runner, he has to leave straight away afterwards, there’s no hanging around.

“Whatever needs to be done, we’ll do it and that’s it,” said McEvoy.

Although there is great positivity regarding the return of the sport, there is no doubting that the loss of meetings has badly affected tracks like Naas.

“It’s been very tough. We’ve lost meetings, any projects planned are stopped for the time being. We’re going to be in trouble but hopefully we’ll be strong enough to get through it. It’s scary times and if the break from racing had extended into July and beyond then every track would have been in trouble. The HRI have been very good in helping us along, and the IHRB, they’ve been working away behind the scenes.

“One thing I loved even before working for Naas was the summer BBQs. We had a fantastic opening day of the year with Envoi Allen winning and then he went straight to Cheltenham and won in great style, that was very exciting. We were really looking forward to our Royal Ascot trials days but unfortunately that’s gone. We see that Lacken Stakes having a big role to play in the future. Aidan (O’Brien) is starting to aim his commonwealth horses there and he and the likes of Ger Lyons are bringing their horses before going to Ascot. I’d like to see that race move from Group 3 to Group 2 status quickly,” said McEvoy.

But with a lot of sporting eyes set to be trained on horse racing when the meetings start back in June, McEvoy senses an opportunity too.

“As an industry, we are in a bubble a little. We know how important we are to each other but as an industry I think we have to put ourselves out more. Involving the public more, maybe arranging more visits to studs, let people go and see the work that is put in from the ground up, the good work stud farms do for the environment, there is a lot of tree planting, proper grass management, some really good environmental measures. These things aren’t known and I think going forward as an industry we have to showcase these sort of things to the public.

“It is an industry, and it is a great industry. If anybody talks about horses and breeding and racing, it’s an industry where Ireland is right up there at the top table and we should be very proud of that,” he said.

There will also be meetings at the Curragh in the first week back with the Guineas weekend to take place on Friday 12 June and Saturday 13 June. The Irish Derby will go ahead on the scheduled date of 27 June.