AWAY from Kildare County’s eight year spell in the League of Ireland, there have been plenty of other Kildare men who have made their mark in the league. I’ve gone for a 4-3-3 formation to ensure that the three strikers mentioned here take their deserved place in the team. 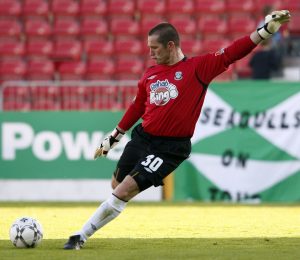 Clane’s Paul Hunt has had an excellent career with Longford Town and Cobh Ramblers but Gough is an automatic pick for this team.

The Suncroft man played underage football for Newbridge Town, and played in the 1987 All-Ireland minor semi-final for Kildare, before being snapped up by Portsmouth.

He played first team games for Fulham before moving back to Ireland to sign for Galway Utd. Signed for Shelbourne in 1994 and during a five year spell established himself as one of the best goalkeepers in the League. Was famously sent off in the 1996 FAI Cup final but Shelbourne won that game and Gough was there when they retained the trophy the following season.

Moved north to sign for Glentoran in 1999 and added three more cup medals to his trophy haul before winning the FAI Cup for a third time with Derry City in 2002.

Signed on for a second spell with Galway and played over 100 games there before winding down his career with Bray Wanderers.

He also won five Irish U21 caps during a glittering career. 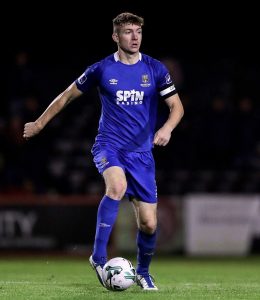 A hugely versatile player, Feely could have occupied a few positions on this team but his best spell with Waterford Utd probably came as a right back.

Made his League of Ireland debut with St Patricks Athletic and made over 30 appearances in his first spell with the club during the 2016 and 2017 seasons.

Moved to Waterford in for the 2018 season and played a huge part in their success that season. The newly promoted side enjoyed a superb season back in the Premier Division and Feely was near an ever present at right back as they finished fourth in the the table. He was named the club’s young player of the year for the season.

Waterford didn’t enjoy as good a season during 2019 but still finished in mid-table Feely showed how he was progressing by being named as the club’s player of the year that season.

Signed back for St Pats ahead of the 2020 and could be a big player for them in future years.

A man who played in practically every position on the pitch during his League of Ireland career in the 60s and 70s. After initially shining for Bohemians in the 1960s, signed for Shamrock Rovers in 1966 and was part of the team that won three FAI Cups in a row, scoring in the 1969 final, and they twice finished runners up in the league. One of his most memorable games came in the 1966/67 Euopean Cup Winners Cup when Shamrock Rovers went up against a Bayern Munich team featuring legendary names such as Franz Beckenbaur, Gerd Muller and Sepp Maier. After a 1-1 draw in Dublin, Rovers went 2-0 down in the away leg but scored twice to lead on away goals before Muller scored a late winner. In 1971, Kearin became the first Kildare man to win a senior international cap when was part of the team that lost to Austria, and only Mark Travers from Maynooth has since won a full cap. Had a second spell with Bohemians before finishing up his League of Ireland career with Athlone Town in 1974. Was a founding member of Kildare Town and he also spent time coaching in Newbridge. 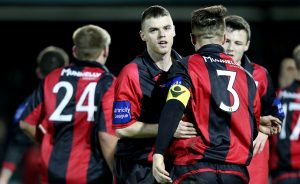 An underage Irish international, Haverty started his League of Ireland career with St Pats. Went on loan to Shelbourne and made his senior debut with the Tolka Park outfit. Returned to St Pats and played over 30 games over the next three seasons before moving to Longford Town in 2012.

After a couple of near misses in the First Division promotion race, it was third time lucky for Haverty when he played a big part in Longford winning Division 1 in 2014. The Clane man played well over 100 games in the League. 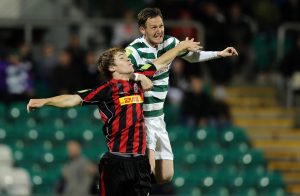 Undoubtedly now better known for his Gaelic Football exploits but Feely’s performances during a two spell with Bohemians were so good that he earned a professional contract with Charlton Athletic. A tall centre back, he was as dominant in the air on the soccer pitch as he is now on the Gaelic field. Went on to play first team games for Carlisle Utd and Newport in League 2 in England, and won an Irish U21 cap, before returning home to turn his attentions to the Kildare GAA team. 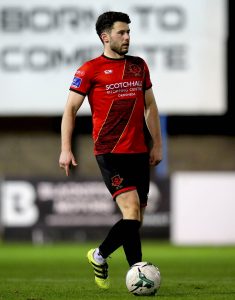 The Athy man played one senior game during his spell in England with Scunthorpe Utd before returning home to forge out and excellent League of Ireland career. Was nominated for a place on the First Division of the year in 2013 when he won the league with Roddy Collins’ Athlone Town. Featured heavily in the Premier Division the following year and although Athlone were relegated, Hughes stayed in the top flight and signed for Drogheda Utd. Hughes had another solid year but Drogheda were relegated on the final day of the season. Again, he moved to stay in the top division, this time to Longford Town but once more suffered relegation. Went on to have two good years with Shelbourne before signing for Drogheda ahead of the 2019 season. Made well over 150 appearances in the league.

Newbridge man O’Riordan was one of the better performers for Kildare during their final season in the league in 2009 and scored four goals that year. Went back to Newbridge following after Kildare County’s demise but was back in the league in the 2010 season with Athlone. Has also represented the Irish Defence Forces team.

Was part of a very good Dundalk side in the early 90s. A pacy winger or striker, he played for the Oriel Park outfit for two years and was part of the Dundalk squad that lost to Shelbourne in the 1993 FAI Cup final. The Carbury man signed for Drogheda and spent two years at United Park. Also played in the Leinster GAA Championship for Kildare. 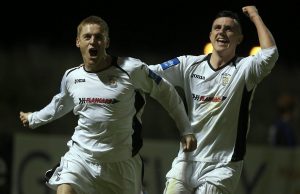 Philly Gorman was a regular scorer during his career
Photo: ©INPHO/Donall Farmer

After a successful spell with Newbridge Town, was snapped up by Dermot Keely ahead of Kildare County’s inaugural season in the league. Had a fairytale start to his League of Ireland career when he scored the club’s first competitive goal in the First Division Cup against Limerick. Progressed well in his two seasons with Kildare before playing for Kilkenny City and Dublin City. Was away for a year with the Defence Forces but returned to Kildare for a second spell in 2006. Signed for Keely once again in 2008 when he was in charge at Shelbourne and spent four years there before signing for Roddy Collins and Athlone in 2012. Scored 17 goals and was named in the First Division team of the year as Athlone won the title in 2013 and he went on to score double figures back in the Premier Division even though Athlone were relegated. Had another season with Athlone in 2015 before signing for Collins once more, this time at Waterford for the 2016 season and again finished the season in double figure for goals. ‘The Brownstown Bomber’, as he was known during his time with Kildare County, ended his career with over 100 league and cup goals. 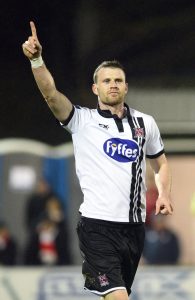 Had made a couple of appearances with Shamrock Rovers’ first team before joining Kildare County on loan for the 2008 season, where he was top scorer and player of the year after scoring eight goals, including an FAI Cup hat-trick against Fanad Utd.

Signed permanently for UCD the following season and their top scorer as they won the First Division title. After following that up with 15 goals in the Premier Division the following year, Shamrock Rovers came knocking again and he returned for a second stint at the Tallaght club.

The Kilcock man was part of the squad that became the first Irish team to reach the knockout stages of the Europa League.

Went on to have a loan spell with Cork City before returning to Rovers for the 2014 season. Signed for St Pats ahead of the 2015 season but the following July moved to Dundalk. Scored two goals on his debut and went on to play a starring role as Dundalk won the title.

Although he broke a bone in his back in 2016, he fought back to full fitness and played during Dundalk’s run to the group stages of the Europa League. Scored a famous last minute equaliser to earn a draw against Dutch side Az Alkmaar, securing the first ever point for an Irish team in the group stages of a European competition. Also scored a winning goal against Maccabi Tel Aviv that season.

Left Dundalk after winning two Premier Division titles for a spell in the North American Soccer League with Jacksonvilla Armada. Returned to Ireland to sign for Shelbourne and played a key role as they won the First Division title and secured their place in the top flight for the first time since 2013. Then scored a last minute winner in Cork in Shelbourne’s first game back in the Premier Division in 2020. Like Gorman, has also scored over 100 Irish league and cup goals. 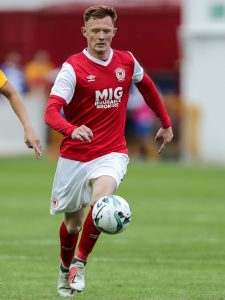 Unlike his striker partners on this team, Shaw hasn’t quite reached three figures for goals but there is no arguing that he has had an excellent career in the league. Scored on his league debut for Bray Wanderers in 2010 but his following season was marred by injury.

The Newbridge man signed for Longford Town in 2012, his best season was in 2014 when he scored 16 goals that season as Longford picked up the First Division title. That earned him the club’s Players’ players of the year award, and a place on the First Division team of the year, and he followed that up by helping Longford to a respectable mid-table finish in the 2015 Premier Division.

His performances caught the eye of Pat Fenlon and he signed for Shamrock Rovers ahead of the 2016 season. Shaw scored seven goals in his first season before enjoying a superb year in 2017. He scored ten league goals as Rovers finished third in the table, and also scored a winning goal in the Europa League qualifiers against Icelandic side Stjarnan and was named Rovers’ player of the year that season. Unfortunately, a broken arm in the second last game of that season impacted his pre-season ahead of 2018 and he wasn’t able to have the same influence for Rovers.

Signed for St Pats for 2019 before returning to where it starter for him by signing for Bray Wanderers for the 2020 season.

Joint Statement from the FAI, GAA and IRFU on spectators