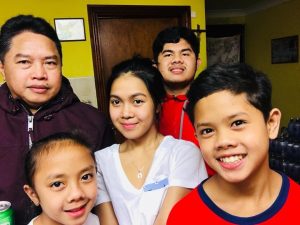 ONE of the sadder stories in these grim times has to be the recent death of Allenwood widower Migel Plangca (55) who died of Covid-19 in the Mater Hospital last Wednesday (13 May), leaving behind four dependent children in the village.

However, in one of the more gladdening of silver linings, the Kildare community and Irish public at large has rallied behind the children and raised an outstanding€211,000 for them – so far!

After Miguel’s death, the Kildare Filipino Community set up a GoFundMe page to help the orphans, and set a modest target of €5,000 –  a figure that was surpassed on Friday last (15 May) – before going through the roof this week.

Twenty years ago Miguel and his wife Gilceria made that wrenching decision at home in Ozamis City in the Philipines that he would come to work in Ireland to offer the best possible chance to their five children.

Miguel managed to secure a job with Green Isle frozen foods in Naas where he worked every available hour in the interim to send home to his wife and children.

However tragedy first struck the Plangca family in 2014 when Gilceria died in the Philipines, and Miguel arranged to bring the younger four to live with him in Allenwood.

However, all this came crashing down on 13 May when Miguel became the second Pilipino national in Ireland to succumb to this awful disease, and leave four children – Mikee (21), Michael (19), John (14), and Chekie (12) – alone in Kildare. (The eldest, Stephanie (27) is working in Abu Dhabi.)

The story could’ve been much, much worse too, as his two eldest – Mikee and Michael both also tested positive after their dad, but managed to shake it off eventually.

They are at least now under the care of their auntie Fely Moore, and the Kildare Filipino Community under the guidance of Aina Conway, the Consulate’s Education, Arts and Culture Officer.

“Nobody really knew where he got it,” said Aina.

“He was ill a week before going to hospital, and he didn’t know himself where he got it,” she explained.

“He was in Naas ICU, then St James’s, and he died in the Mater,” explained Aina.

Even Aunt Fely got the virus also “but she got over it, thank God”.

“It’s tragic, to be honest, losing two parents. Poor Mikee is such a wonderful girl, she’s so motherly, and the other siblings are very lucky to have her and Aunty Fely, because they couldn’t deal with this tragedy on their own,” said Aina.

She explained that though Mikee had her Leaving Certificate from a few years ago, she had deferred attending college so she could be a fulltime carer for her younger brother Michael who has autism, and also attended the Holy Family Deaf School in Cabra.

One of his teachers there Maggie Owens made a point of contacting the Nationalist to explain the enormity of this task for Michael – who had no English in the first place, and then had to learn it through sign – but remembered his dad Miguel as “very kind”.

The principal of the school Eimear O’Rourke even issued a statement of condolence.

“Our school community was very saddened to learn of the passing of Mr Miguel Plangca. His profoundly Deaf son Micheal is a past pupil of Holy Family School for the Deaf, Cabra.

“I recall Mr Plangca as a very supportive parent  who…generously sponsored a fund-raising event despite the challenges of his own family circumstances, and our thoughts and prayers are with Michael and his family at this very sad time,” she said.

“Hopefully, they can stay over here, educationwise, I think Mikee and Aunty Fely would agree with me,” said Aina, noting that Chekie was due to follow her brother John to St Farnan’s in Prosperous in September.

Meanwhile the Kildare Filipino Community – which has been around for 10 years now  “to help make older Filipinos feel more at home” – is co-ordinating the family’s care and has already raised over €200,000 through GoFundMe.