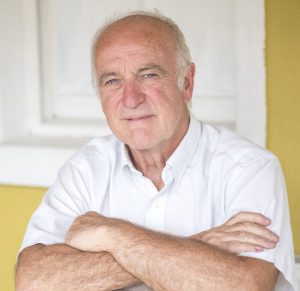 A LOCAL playwright and author who has just published his 20th book this week, and already it is being pitched for as a movie.

Castledermot native John McKenna has just released ‘Hold Me Now’, a love story about the Eurovision and Eighties Ireland, but whose genesis was developed by an RTE wildlife presenter.

“He had been talking about doing a film based around the Eurovision for a while.” He said.

“I was on the radio one morning talking to Pat Kenny about work I did with Leonard Cohen. Derek heard this and thought of me,” said John.

This was not so surprising as they had worked together before as John was a producer for RTE for 22 years before taking up the biro fulltime in 2002, with a first novel was about Athy adventurer Ernest Shackleton.

He has also written a dozen award-winning stage plays, and has returned to teaching part-time in Maynooth University, having started out as one in Castledermot Community College in the Seventies.

“He had been talking to film producers about his idea, and they suggested that if there was a book it would be easier,” said John.

“I started it in October and I finished it in March. The story was generated by Derek, and a lot of the characters are his,” said John graciously.

The story is set between the 80s and now, and is based about a guy called Steven Sherrard on a stag party from Liverpool who meets up with a girl called Linda Martini who has a spare ticket to the national song contest where they have a first hug to THAT song.

The story is narrated by their son Sean Sherrard (Johnny Logan’s real name), as he attempts to get Johnny Logan to sing at his parents long-delayed wedding.

“That’s the framework. It touches on a lot of Eighties themes, the abortion referendum, pregnancy outside marriage,, but it’s a feel-good in the end,” smiled John.

“Derek is hoping to develop it into a musical for stage or film, that would be his ambition – either or both,” said John.

The Nationalist also spoke with the RTE man as he coincidentally was on his way to Cork to publicise the book on the Today Show with Daithi and Maura.

“About two years ago I was working on another project and this idea just popped into my head that nobody has made a movie about Eurovision,” said Derek.

However, he was quick to acknowledge that in that time American comedian Will Ferrell has done just that for Netflix with a movie about the Icelandic entry starring Pierce Brosnan and Rachel McAdam.

“Remember a few years ago there was two movies out about Churchill. One was crap and one won Gary Oldman the Oscar,” he reasoned.

He explained that the 1987 National Song Contest was the only one he ever attended, but it was enough to germinate the idea which John fleshed out for him.

“And now we have the book, and hopefully in a year or two maybe a movie or a stage musical,” he predicted.

“It’s visual chewing gum, it isn’t going to change the world,” admitted Derek, suggesting it would be a “jukebox movie” like Mamma Mia, or Queen or Rocketman.

“I had the two main characters, but John had to give them depth. I knew his  passion for writing, and I couldn’t do that,” he said.

“I could get it so far, and then he’d done the rest. It mightn’t go anywhere but if I didn’t do it I’d look back in 20 years and wonder why,” he said.

A few advance copies have already been sent out to potential partners.

“We’re waiting for the book to gain a bit of traction with the BBC or Channel 4. We wouldn’t rule out RTE either!” he added.

“We have a plan how this can be done for little or no money, and I’d love it to be done by an Irish production company,” he revealed.

“I don’t want it to be the next ‘Mamma Mia’, but more like the next ‘Riverdance’,” he said.