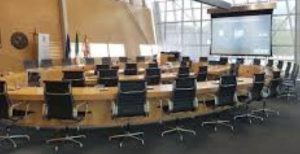 AS measures begin to ease this week it looks like Kildare County Council will meet outside Naas for the first time, with a lecture hall in Maynooth University the favourite to accommodate the full 40 in time for its AGM on the last Monday in June.

“They’d been looking at a number of venues, like hotels, but my own view I wouldn’t be surprised if it’s Maynooth,” said Cathaoirleach Cllr Suzanne Doyle.

“Corporate Services have looked at a couple of venues…Kilashee is out, but Punchestown is possible,” she said, as to other venues that could facilitate 40 councillors, as well as executive staff and members of the press within the parameters of social distancing.

A decision on the choice will be made onMonday (25 May) when a gathering of a quorum of at least 17 party leaders and the non-aligned independents will meet in the Council offices to formally give permission to the Council to meet elsewhere.

“The May meeting will take place in this format. It will be a restrictive enough agenda and will go through the motions of ratifying the decision to have the meeting outside the Council chamber,” said Cllr Doyle.

With the lockdown having put paid to the March and April meetings, the Council was run by executive order by CEO Peter Carey on behalf of the elected members.

“The Chief Executive carries out the executive functions of the council and continues to do so as normal,” said spokesperson Clodagh Helay..

“There was no change with regard to executive functions and reserved functions [during lockdown], and senior staff meet at least weekly and more often if required,” she said.

She also confirmed the return of Municipal District meetings next month in the Council Chamber, as each can take place there within the parameters of social distancing.

“The full schedule of Municipal District meetings for June will be held in the Council Chamber with provision for the press and a small number of the public and adherence to social distancing measures,” said Ms Healy.

Cllr Doyle welcomed the return to full protocol, because during the lockdown “statutory meetings couldn’t happen” and “we would’ve been putting impossible asks to executives, it would’ve been unfair to them”.

“We’re getting back to usual business under very different circumstances, and the ramp-up is going to be phased,” she said.

With regards to the smaller Municipal District meetings Cllr Doyle explained why they would formally return next month, and not before the end of May.

“It would be a farce. We’d be giving questions to staff who would be in catch-up mode, under new work practices and the amount of questions coming in from five municipal districts [after three months] would be unfair,” she pointed out.

“In the circumstances, the public servants have all done very well,” she said.

Cllr Doyle and 16 colleagues will now gather next Monday to decide on a venue for June, where she will then oversee the appointment of her successor to the Chair of Kildare County Council.

Kildare County Council have continued to provide essential services during the course of the Covid 19 restrictions in compliance with Public Health advice and decisions of Government.

The Cathaoirleach on behalf of the members also attends these meetings and keeps the members fully informed.