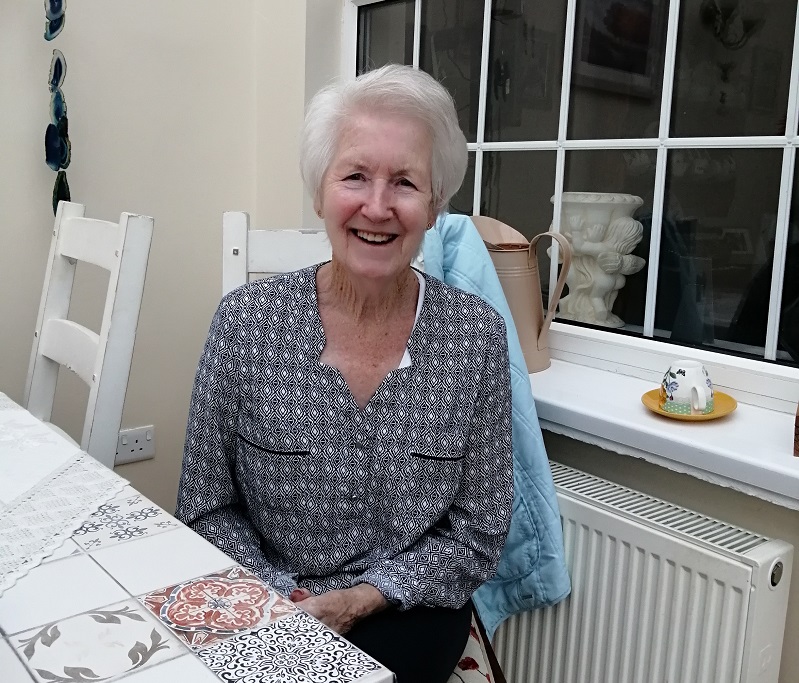 “I know in my heart and soul that we’ll come out of this and in the very near future. I’d be very, very positive.”

That’s the view of Lily Morrissey (pictured) from Castleroe West, Maganey, a woman whose energy, enthusiasm and positivity is palpable during our conversation over the phone one afternoon. While cocooning is no easy task, even with a recent easing of the guidelines, it’s clear that Lily is making the best of a difficult situation and keeping busy.

“I’m spending my time painting and decorating both inside and outside, gardening, doing all the things one does, taking in the walk twice a day,” she explained, adding that she helps keep the local community green area ‘immaculate’. “I’d look after the planting and the painting. The lads make stuff and they say, ‘We’ve made it, you paint it!”

Lily has two daughters – Irene who lives nearby and Dawn in Boston – as well as three grandchildren (Tracy, Finn and Jack) and one great-grandchild, Harry, who’s a year and eight months old. Her late husband was Johnny, who she described as a “great footballer in his day [for Grangenolvin and Kildare] and a great friend of Clem Ryan’s too. They played soccer together in Kilkea”.

Lily turned 80 in January and explained that she’s “very fit for an 80-year-old”. She has always walked, especially since she retired from work and, after that milestone, she also took up set dancing with the Dolmen set dancers in Carlow.

“I’ll go out normally five times a week set dancing. We’d do it in Carlow but we’d do it all over Ireland, we go away for weekends, you know, to different parts of Ireland where there’s a set dancing weekend,” she said. “This time of the year now, May, we’d always be going to a place called Portmagee in Co Kerry, but unfortunately we didn’t get going this year with everything that’s going on.”

Retirement for Lily came in 2010, after 41 years working at Kilkea Castle. She worked there until the age of 71 – “the hotel closed down, we had to retire”. She met some “wonderful” people over the years and a few famous faces too – people like Pierce Brosnan, Gabriel Byrne and even the Shah of Persia “and his five wives”.

The castle has since reopened, of course, bought by Americans Jay and Christy Cashman who carried out major restoration work. Lily said it’s nice to see it back and she spent her 80th birthday in the leisure centre. Incidentally, “the wife of this gentleman [Mr Cashman] is on the film board with my daughter in Boston,” she noted. “A small world.”

As well as working in the restaurant at Kilkea, in the evenings Lily also sang for guests from around the world. It was through the castle that she wound up travelling to America in 1983 for a month, singing in 13 states. “It was a man called Terry Flynn from Waterford who was the tour director,” she recalled. “He took people from Ireland to America every – I think it was every two years. He took people out to sing and to advertise… whatever hotel you were working in at the time.”

Lily is a great singer and she’s a member of the Castledermot Parish Choir and the Levitstown choir. “It’s absolutely wonderful to get out and meet the people and have a chat and all the lovely singing,” she told me. “It’s good in life to be able to do things like that at my age.”

Singing at home helps her to get through cocooning, as does her tape recorder and KFM’s Clem Ryan. She prefers traditional Irish songs though she can “sing any type of song”. Lily showcased her voice recently in a beautiful rendition of Raglan Road which was posted to the Entertain Us Athy Facebook page.

“I’d sing all the time, all the time,” she explained. “Believe it or not, there was a woman rang me last week to know would I sing a song for her. It had been played at her wedding and she will be 100 years of age on the 7th of December. And she’s having a party and I sang the song for her over the phone because, needless to say, she’s cocooning as well.

“I was only nine years of age when my mother asked me to sing a song at my sister’s wedding, back in those days they were always in the houses, there was no such thing as hotels, they couldn’t afford them anyway,” she added. “The priest was there of course and she said ‘Will you sing a song for the priest?’ And of course, me being nine years of age, I said ‘No, I’m not going to sing mam’. And she said, ‘If God gifted you with a voice, make sure you give everybody pleasure from it’. And I haven’t stopped from that day till this!”

Lily is being well looked after during the pandemic – her daughter Irene, who lives not far away, “does all my shopping and comes down and looks after me”, while she has wonderful neighbours who might “shout me from the gate, you know, which is wonderful to know there’s someone else around”.

“It’s great to be in, living in a terrace at a time like this,” she said. “It saves my daughter from worrying about me because there’s other people around me. She’ll come down every single day anyway.”

Lily encouraged other people to “find a goal and go for it”, to “find another road to go down and do what you have to do inside or out in the garden… painting whatever it is outside. We can go outside the doors anyway now that the cocooning is not quite as bad as it was.”

People, she said, just have to be positive and think positive, something she clearly practices.

“I never look back, I always look forward,” Lily remarked. “That’s very important. Because if you look back – you can look back at the good things, but you have to look forward. And I know in my heart and soul that we’ll come out of this and in the very near future. I’d be very, very positive.”