HAVING turned 35 in March, Dennis ‘Hurricane’ Hogan knows time is running out if he is to fulfil his dream of becoming a world champion. 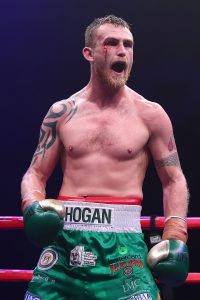 Dennis Hogan believes Wayne McCullough can help him fulfil his dream of being a world champion
Photo: Chris Hyde/Getty Images

To help him do that, he announced last week that he is switching coaches and will now work with former world champion Wayne McCullough. The ‘Pocket Rocket’ needs no introduction to boxing fans in Ireland and beyond. During a glittering amateur career he won a silver medal at the 1992 Olympics and then went to become a world champion and had legendary fights against the likes of Erik Morales and Prince Naseem Hamed in the late 90s.

Hogan had previously worked with Australian coach Glen Rushton and under him fought for two world titles but decided to make the change partly due to the impact of travelling back and forth to America ahead of fights was having on him.

Hogan stepped up to middleweight to fight Jermall Charlo for the WBC title last December and while acknowledging that he was up against a more powerful opponent, the travelling for media duties close to the fight left him drained.

“Nine weeks out from the fight, PBC wanted me in New York, I pleaded and did everything I could to get out of that but contractually I could have been fined a third of my purse if I didn’t fulfil all my obligations so I just had to go. We went seven weeks out and it was after that we were lifting the training and it was then that I started to get all these little injuries. Charlo aside, I wasn’t feeling myself the week of the fight but that’s not taking anything away from him, Charlo’s power was absolutely phenomenal with those shots he put me down with. I just knew that going forward I wanted to ensure that I felt good on fight week and cut out all that travelling so it was definitely time for me to go over and have those full camps in the States. I learned that lesson once and I shouldn’t have had to learn it again but it won’t happen again that I’ll have to go over and back. That’s all on me and I just have to make sure it doesn’t happen again,” said Hogan.

Time spent away from training due to knee surgery earlier this year gave him the chance to reassess what he had to do if he was to fulfil his dream.

“I had surgery on my knee in February. I tore a meniscus in my knee and when they looked in on it they saw the ACL wasn’t looking too good either, there were a few tears because of a few traumas from bashing knees in the ring. So, they decompressed a few little cysts that had come to mind the tears, they cut back the bone. They did a great job, the surgeon does all the footy players over here and he just said my knee was good to go again.

“It was only when I had that surgery on my knee that I had time for some self reflection and I decided that I do need to do this. This could be my last shot at it even though I feel fresh and ready and more determined and inspired than ever. If I don’t get this right this time I might not get another shot. PBC have promised me another shot with one more win,” said Hogan. 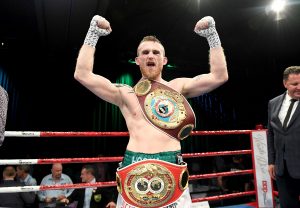 The hook up with McCullough came after a chance conversation on a boxing podcast.

“I had some very high profile coaches in America and I was trying to zone in on who I thought was the best fit. I had spoken to one of them and they said to come on over and I was thinking that was on the cards. There was another one that I was about to make contact with and to see what the go was there. Then after I was speaking to Al from EnswellPodcast and at the end of a two hour conversation he just brought Wayne up for whatever reason. I had been wondering for a while what Wayne had been doing because I knew he was over on the West Coast, around Las Vegas, Los Angeles. He had always been on my mind, an Irish trainer with an Irish fighter like myself always sounded good to me. When Al said his name I was thinking that sounded like a good one so I told him to have a chat with Wayne see if that might be an option. He set up a call and we had a chat and a couple of things fell into place. Hearing what he had to say I feel this is exactly where I am supposed to be and I feel great about the connection,” said Hogan.

Due to the current Covid-19 pandemic, the discussions with McCullough have only taken place over the phone so far but Hogan has been excited by what he has heard. At this stage in his career, he doesn’t want to rip up and change his style completely, rather, he is looking to hone his skills and make the most of his strengths.

“Eddie Futch was Wayne’s coach and I think he gained a lot of experience there. Futch said that of all the fighters he had that he felt Wayne could train a world champion. That says a lot about Wayne and his way of thinking. What I’ve heard from Eddie and what Wayne has learned from him is that it is about looking at a fighter’s strengths and tweaking them, making adjustments rather than just changing the style. There were American coaches and Mexican coaches but I felt they might try change my style completely where I feel like what I am doing works. It’s just about maximising a couple of things, doubling down on my strengths and looking to see if there are any weaknesses,” said. Hogan.

Maximising his power is one of the key things that Hogan wants so do ahead of his next fight.

“I am looking to ground myself more to increase my power. That power is there, man. I see it all the time. I think in fights I’m too much on the move so I don’t really let myself settle and let them go. I spoke to Wayne about it and he said ‘Dennis, you have power, no doubt about it, and we are going to make sure you can bring that into your fights’. It’s obviously about timing and reading your opponent and I truly feel Wayne will be able to make that difference,” said Hogan.

“Looking at all that and the training that Wayne said he would do, I said ‘wow, that excites me no end’. I asked Wayne what way he’d do it and he said that he’d get me over there 10-12 weeks before the fight and the way he was talking just lit me up with excitement,” he added.

For his fight against Charlo, Hogan knew he was taking a risk by stepping up in weight but learned a lot from being in the ring against somebody so quick and powerful and he thinks that McCullough can help bring that into his game now.

“I just feel like he is going to know what it is like to be in the trenches and to be able to mull that over with somebody who has been there I think is going to so much more in terms of those little one percenters. For Charlo, the speed and power he had combined, I’m not a middleweight really, I tried to let on I was but I am matched to the super-welterweight division but to see that speed matched to that power was something that I had not seen before. I do feel Wayne is going to bring a lot to the table, him at bantamweight, he is going to be able to answer a lot of my questions about speed and timing,” he said.

Hogan also loves the fact that one of McCullough’s best fights was against his idol.

“My favourite to watch was always Prince Naseem. I remember watching him as kid and I loved the stuff he used to do in the ring, that’s stuff that I do now when I’m messing around in training. For him to have fought Naz, and even Erik Morales and all those boys, that’s a wealth of experience in itself and to be able to just have chats about that in between sessions in camp I feel that will add to my knowledge,” he said. 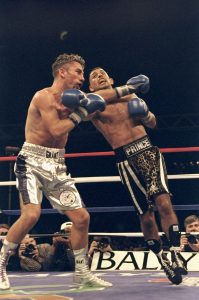 Many feel, including Hogan himself, that he should already be world champion. He went to Mexico 13 months ago to fight Jaime Munguia in his own backyard and was only defeated by a very controversial points decision. Munguia is considered to be one of the biggest and strongest fighters back in Hogan’s more natural weight of super-welterweight and he feels the success he had against Munguia, plus the experience of fighting somebody like Charlo at a higher weight, proves he can be champion in that category.

“The Munguia one speaks for itself. I always believed I would be champion but after that there was nothing left for me to think I believed because I’d been there. 154lbs was where it was at for me but the opportunity came up for me to go to middleweight. There was all this talk and I wasn’t really sure about the weight, I wondered would that make a difference. A fighter will always try to believe, I was telling myself that it would be easier to make weight and that I could put on a bit more muscle but ultimately on the night I think his power did make the difference,” said Hogan. 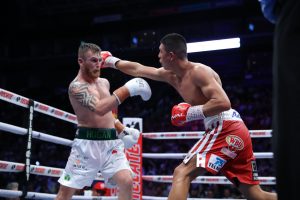 Many believe Hogan should have been crowned world champion when he fought Jaime Munguia in April 2019
Photo: Tom Hogan/Golden Boy/Getty Images

Like all sports, boxing is trying to figure out how best to move forward in a safe fashion in the current situation but Hogan is confident that he will be able to fight before the end of the year.

“I definitely feel like I will. All promoters are looking right now. I am contracted to PBC for another fight and if they start to run off those show I can actually get into the States quite easily. I chatted to somebody who had gone over for work two weeks ago and there was only 16 people on the flight. If you can prove that you are going for work, and me certainly going for a big fight would definitely qualify for that. So I can get into the States no problem and I can do what needs to be done. As long we can get a date and get it locked in we are good to go,” said Hogan.

McCullough lived out Hogan’s dream. He won a world title in Japan in 1995 and then came back and successfully defended it in Dublin in 1996. That has been Hogan’s goal since he turned pro and now he hopes this link up can help him finally realise that.

Kilcullen’s Dennis Hogan – The Hurricane That Won’t Blow Out