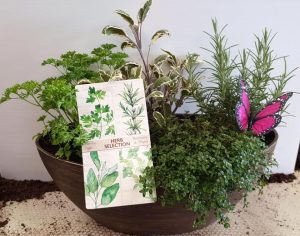 One of the herb baskets for cocooners

ARE Tidy Towns recently launched a fantastic project to support cocooners in the community. A number of people have been nominated to receive a small container herb garden to look after and use during isolation – the plants include parsley, sage, rosemary and thyme.

Mary O’Connor, chair of the Tidy Towns group, explained that they felt that their hanging baskets project in association with some of the local businesses “may not be appropriate this year” as a lot of the businesses were shut down, although they’re continuing with their container plantings, including those on the main street. They realised that there were people in the community, particularly those cocooning, who weren’t going to “get any benefit now from the flowers in the centre of the town” and they came up with an idea that isn’t just practical but fun, involves some creativity and provides something of a distraction.

“We thought we’d like to include that herb in the mixture because, we said, look, we want to show people that are cocooning that they’re not forgotten, that they’re very much part of the community and also, I suppose, it’s a bit of a remembrance for people who may not be here, people, you know, that might have lost the fight to the virus.”

Funding was provided by Kildare Co Council through its Covid-19 Emergency Fund as well as a local businessperson, while Amour Nurseries “is helping us put them together”. When we spoke, Ms O’Connor said that they were hoping to get containers out to people over the course of a week to ten days.

“The applications are closed now because we got such a great response, but we hope to have about 50 containers going out to people,” she said.

And, alongside those containers, the project will feature three video demonstrations to perhaps help people make the most of their new herb gardens. One is by Bernard Gibney from Gibney’s Garden Preserves, who will be talking about using sage to make a pasta dish. Georgina Kemmy will speak about the medicinal uses, while Ms O’Connor herself will talk about the use of the plants for pollinators.

It’s a fantastic project and perhaps one that could be replicated elsewhere in Kildare.