IN 2013, Athy Town FC met up to celebrate the 20th anniversary of the day they won 6-0 in the Polikoff Cup final in Dalymount Park

The bellies might have been bigger and the hairlines long since receded but the slagging and team spirit was just as strong as the day they won the cup with a 6-0 win over Balscadden Blues at Dalymount Park.

The evening began with the lads getting their boots on again for a game at the indoor Astroturf facility at Athy Town before moving on to Clancy’s bar to watch a rerun of the game.

Richard Foley was captain of the team back then and he enjoyed being back among the company of his former team mates. 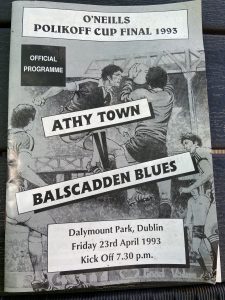 “The video showed us getting interviewed going up on the bus and all the craic around Athy before we left, it was great to see it again. There was lads jeering each as we looked back on each other 20 years on. There was terrible slagging, there were a few lads like myself that have put on a bit of weight, then there were other lads who have lost all the hair,” he said.

The video brought back many happy memories and also restored a few that had slipped away.

“I have the video at home, every player was given a copy of it at the time. I probably would have looked at it when we got but I haven’t looked at it since. It was definitely different to how I remembered. Even the goals, I had forgotten who scored. I knew Paul Kenny got the first and that Johnny Quinn had scored, I remembered Charlie Hughes’ goal because it was a great strike from just inside the box to put us 3-0 up just after half time. Two of the other goals, Joe Tynan’s and Robert Hutchman’s, it was only when I saw it again that I remembered them,” said Foley.

A strong centre half, Foley was a real leader of the team and he recalls that it was a side full of talent. 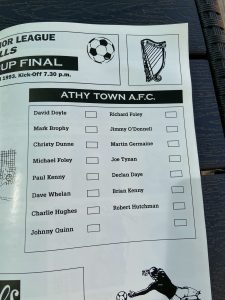 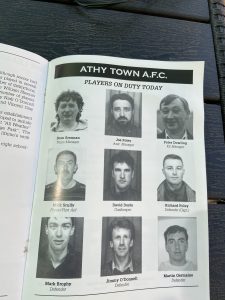 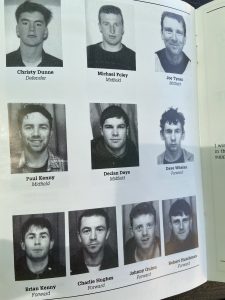 “We had some really good players, Paul Kenny, Declan Daye, Robert Hutchman. Robert was our centre forward and was a nightmare for defenders. He used to take terrible hardship, he’d come in after a game and there would be studs marks down the back of his legs. He was well able to give it out as well though. He was a brilliant striker though, he never stopped running.”

“Jimmy O’Donnell was great at the back for us as well, he never stopped talking. He was 37 at the time, Chalie Hughes and Joe Tynan were about 30, 31 but the next drop then was to about five of us who were around 22 to 24 and then Christy Dunne was 19. The nucleus of the team was very young so we needed a good head at the back. Jimmy was the sort of player who wore his heart on his sleeve, he wanted to win badly. If you did something wrong he’d let you know but he’d come in then after a game and apologise to you,” he said.

Foley recalls that the team brought a great buzz of excitement to the town back then.

“At that time we were going so well that there might have been 200, 300 people up in Athy to watch us play on a Sunday afternoon. We had a clubhouse with a bar in it then. It got to the stage where we had to come in the backdoor because if you came in the front door it might take you 20 minutes to go the 20 yards to the bar because everybody would want to shake your hand and talk to you about the match.”

“The Sunday before the final we had the Lynch Cup final over in Newbridge. It was an absolutely miserable day. It lashed rain, there was pools of water on the pitch but we won 2-1. There wasn’t that much talk about the Lynch Cup, it was all about the Polikoff Cup the following Friday night. The build up for the Polikoff had started even before the Lynch Cup final was played but once we won that it really snowballed from there. Even in work, all lads were talking about was Dalymount Park on the Friday night. There was a great buzz around the town. There were two buses ordered to go to Dublin and we actually had to get a third, and there were still more who drove to the game themselves.”

The video of the game showed how football used to be played and as a referee in the KDFL, although currently sidelines through injury, Foley was interested in some of the tackles that went unpunished.

“There were definitely two tackles and one of their lads struck one of our lads. You just knew that if it happened today they’d be gone. I thought the referee was very good but one thing about it, nine times out of ten when a referee made a decision nobody said a word, they just got back behind the ball and got on with the game. Joe Foley (assistant manager) used to tell us if we have energy to get onto the referee we have energy to run. It was a different game back then though, part and parcel of the game would be that the boot would be left in. You got away with it then, there were tackles going in from behind, you wouldn’t get away with it now but back then that was the way things were. If you got a belt your next objective would be to get him back. You didn’t get up and start an argument, if you got a belt you just got up and got on with it and got him back the next time you had a chance. That’s the way it was,” he said.

Once the game was finished, the celebrations began in earnest and they turned out to be just as enjoyable as the game itself.

“The celebrations were really good. The craic afterwards was really good fun. Mick Hogan, who owned the InDublin magazine at time, was there and he bought everybody a round of drinks. I think at the time Bohemians had three bars under the main stand and Athy filled two of them. We stayed on there until closing time before heading home,” he said.

The cup final victory wasn’t the end of the success for that team and they enjoyed some more good times in the ensuing years but Foley feels they didn’t quite win enough trophies for a team so full of talent.

“We finished out the league that year but doing so well in the cups probably proved our downfall. We were in the running for the league but we ended up having to play eight games in something like three weeks. We ended up finishing runners up which was a bit disappointing because we wanted to win it be we got promoted into the Major Sunday division which was the top division in junior football in the Leinster Senior League. The following season we won that league and went up to intermediate football and had another good season but then some of the older lads retired. Lads in my age group were 27, 28 but we didn’t have any younger lads coming through. We got about four or five really good seasons but things drifted apart once Dom Brennan and Joe Foley stepped down as managers and we lost a few players to injury as well,” he said.

WHERE ARE THEY NOW?

Dom Brennan (manager): Played in Sheerin Cup final in 1975. Was involved at committee level for years. Now living in Portlaoise.

Peter Dowling (Kit Man): Still one of the best ticket sellers around the town. A great clubman and still very well respected within the club.

Mick Scully (Physio): Either to be found on a golf course or walking his dogs around the Aldridge Park pitch.

Richard Foley: Captain on the night, former chairman of Athy Town and is now a referee in the KDFL.

Mark Brophy: Came on for Charlie Hughes. Played a GAA county final for Athy in 1995 and went on to manage county winning minor and senior teams.

Jimmy O’Donnell: The oldest member of the team. Played in the Sheerin cup final in 1975 for Athy Town. Played for Athy in four different decades, 70’s, 80’s, 90’s and 00’s. Now the secretary for the KDFL and Leinster Senior League teams and is involved in the summer camps in the club.

Martin Germaine: Played underage for the club. Son Conor now plays for under 16 and he is now heavily involved in Rheban GAA

Christy Dunne: The baby of the team, right back in the final. Played GAA for Kildare and was the only player from this squad who was still playing when Athy reached the Polikoff Cup final in 2008. Playing over 35’s with Woodstock Celts

Joe Tynan: Long servant to Athy Town, went on to manage the first team and also had a spell as chairman.

Paul Kenny: Current co-manager of the first team along with his brother Brian. An excellent coach, particularly in getting players fit.

Declan Daye: Man of the match in the cup final. Still a supporter of the club, now involved in Athy Anglers and is a very keen fisherman.

Dave Whelan: Came on for Johnny Quinn in the final. Another good servant to Athy, also played for Clonmullion.

Brian Kenny: Unused substitute. Was coach of the team who reached the Polikoff Cup final in 2008 and is present manager of the first team. Also plays over 35’s football with Woodstock.

Charlie Hughes: Left midfielder. Was capped at Ireland junior international level, represented Athy for over 20 years. Still an occasional visitor to Aldridge Park to cheer on the first team.

Michael Foley: Injured for the final so missed out.

First appeared in the Kildare Nationalist in May 2013