FROM THE ARCHIVES: From Castledermot to California

KILDARE County may have barely made a footprint in the sand of Irish football history but for one man, his spell under Dermot Keely at Station Road led to a very interesting and hugely successful career in soccer in the USA.

Having signed from Castle Villa, Bryan Byrne only managed seven appearances under Keely but when the manager’s son Alan returned from his time at UC Santa Barbara with the news that the college were looking for players, Byrne was one of the first names that came to mind for Keely. 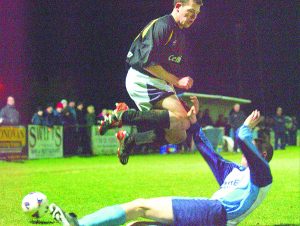 “Dermot played a huge role in me going because he basically told me to go out and experience it because if it doesn’t work out I could always come back and play here. It was a no-brainer once I had talked to him,” said Byrne, who has been back in his native Castledermot for the past couple of weeks.

College life in California was good to Byrne as he enjoyed four successful sporting years there but it did take some getting used to at the start.

“It was tough, it was tough. I was lucky, David McGill (former Shamrock Rovers and Shelbourne midfielder) was there when I arrived. You have to adjust to life over there and I think having him out there was key because if he wasn’t there I think I would have come back very quickly,” he said.

Byrne played 77 times for the college, scoring 11 goals and 19 assists and his pacy, attacking style made him a stand out player. But it was his form in 2006 as the Gauchos’ (the college nickname) won their maiden College Cup title that had the professional clubs sitting up and taking notice.

“Wining the National Championship was obviously a big deal because it was the biggest college game there is. Our season ended in December and the MLS (Major League Soccer) draft was in January. LA Galaxy had rang me at one stage and asked if I would play right back and I was kind of expecting them to pick me up but midway through the draft I got a call from Steve Nicol at New England. He told me that they wanted to pick me up, they were looking for a right midfielder to replace Steve Ralston (an experienced USA international) long term. I jumped at the opportunity,” he said.

Nicol, a former Scottish international who won four league titles and a European cup with Liverpool, was a big influence on Byrne even if they were complete opposites.

“Stevie is a Rangers, Liverpool and Scotland man, I’m Man Utd, Celtic and Ireland so we had a bit of a clash but we had a lot of fun about it,” he said.

Byrne wasn’t on the massive money that the likes of David Beckham command in the MLS, he earned around $30,000 a year as a senior roster squad player, and life as a professional was tough.

“I just think that I wasn’t at that level day in, day out. There were days when I thought I was a solid player and could have earned a spot but from day to day it was very mentally challenging. You have to play to such a high standard every day and I think that was my downfall.

“The quality of players was amazing. The players I got to play with were exceptional, Shalrie Joseph, Steve Ralston, these guys were international players.

“I was used to playing in front of big crowds at Santa Barbara, maybe 12 or 13,000. It’s a different level when you are professional though and we were playing in front of crowds of 20 or 25,000 and even sometimes at an away game there were crowds of 40 or 50,000. It all adds to the excitement factor and gets the adrenalin pumping before the game.

“It was a great experience.”

In the end, Byrne made just one appearance under Nicol before dropping down to the USL Premier Developmental League in 2008.

“I moved on to Ventura County Fusion where I had two seasons and we won the PDL division. That was in the third tier of soccer, below the MLS and the USL. It was still a still a good level. There were a lot of ex pros and fellas looking to make a name for themselves,” he said.

By now, his time as a professional was up so he took a job with internet company Shopzilla, and that was to inadvertently to lead to the beginning of Bryne’s boot review website, www.soccercleats101.com.

“One of the pre-requisites of my job was to start a blog. I was obviously going to do something about soccer and I’ve always been very interested in boots. The word cleat comes from the American terminology and it really took off. There was nobody else doing it in the US at that stage and I got a ton of traffic within the first month of my blog being up. I continued doing it as I was working away at my job before it got to the stage where it was pretty much full time and I was getting a full time wage from it so I was able to quit my job.”

So, what does he look when reviewing a boot, or as the Americans would say, a cleat?

“Usually I’ll take a pair of boots and spend two or three weeks with them. I’ll try and get in maybe four training sessions and two or three games. I’m at the stage where I can distinguish different attributes for the boots pretty quickly. The key thing is are they comfortable? Do they offer durability? I distinguish the different types of technology on the boots. I’m looking to find if a boot is designed to put more spin on a ball or things like that. There is a big push on now towards lightweight boots and I’m trying to work out if a 5 oz boot is better than an 8 oz boot,” he said.

“The website continues to grow. Nike were launching a new boot this week and they wanted me to go up to Portland to do a demo for it which is a bit of a bummer because I am back home but what can do you?”

Byrne, who turns 30 next month, enjoyed his spell back in Ireland and even got the chance to display his devastating pace and goalscoring ability in a Castle Villa jersey once more, scoring four goals in a 7-0 win over Kildare Town last Sunday but his life now is in California. 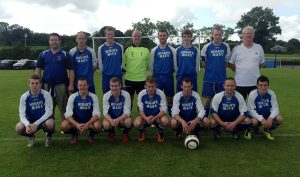 Byrne, front row and second from the left, in the Castle Villa line up

“I’m married and have an 18 month old girl. My wife is an athlete so she appreciates my approach to the blog and sports. The big thing for me over there is that it is very consistent weather. You can get out at any stage during the week, if I am testing boots I don’t have to worry about going outside in the rain.”

Byrne still plays for a team in the USASA Coast Soccer League and his love for soccer, whether it be in front of one man and a dog for Castle Villa or 50,000 for New England Revolution his love for soccer will never die and has now led him down a very exciting career path. 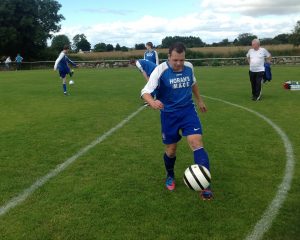 Byrne on one of his last appearances for Castle Villa

This article originally appeared in the Kildare Nationalist in August 2012.