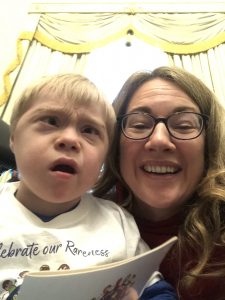 Aisling McNiffe with her son Jack: ‘he deserves to get some fresh air just as much as everyone else’

THE mother of a medically vulnerable teenager has stressed the importance of people practising social distancing.

Aisling McNiffe from Ardclough explained that the canal near their home is great for walks but has been “manic” since the beginning of lockdown. She noted that the canal path is around two metres wide and some people are walking and cycling two abreast and not moving to single file when others are passing them. It’s a risk to vulnerable people like her son Jack.

“Jack will be 15 in July; however, he looks like a five-year-old and weighs less than 20 kilos. He has a complex medical diagnosis including Down Syndrome and a rare auto-inflammatory disease. It causes chronic arthritis, headaches, temperatures and more,” she told the ***Kildare Nationalist***. “He has a heart condition which requires further open heart surgery and lung disease. He also has mild scoliosis and hip dysplasia. He has a severe/profound intellectual disability and is non-verbal; he is incontinent and uses a wheelchair. He is tube-fed and requires around-the-clock care. He is on meds that suppress his immune system. He is currently awaiting funding for immunoglobulins which will be given at home. Jack is under the care of more than ten medical teams in Crumlin Hospital.”

The canal, a five-minute stroll from their home, is lovely for walks as Jack has a three-wheeler buggy, and Aisling also has a large bike to take her son for cycles. She noted that it’s also nice and quiet as Jack gets easily frightened in busy places and the fresh air and the ducks and swans are nice for him.

But she also said that joggers are jogging in between people trying to social distance and cyclists are passing in pairs.

“The canal has been manic since the start of lockdown. Lots of people use it for running, jogging, cycling and walking. I started taking him after 5 May when it was announced that those who had been cocooning could venture out again. But it hasn’t been a pleasant experience … it’s a terrible shame as he deserves to get some fresh air just as much as everyone else, especially after being cooped up for seven weeks! Many people are selfish,” Aisling commented.

“Social distancing must be adhered to. It’s not that hard to allow two metres between you and others. We need arrows on the path and posters to remind people. I think most people would try to adhere to the rules. There are always a cohort that believe they can do what they want.

“The risk to Jack is high – he has had a very tough year and has been in hospital three times with chest infections. He spent two weeks in hospital at Christmas gone by. That was his fifth Christmas in Crumlin. He was in ICU last February with flu and pneumonia, so it would be extremely dangerous for him. I doubt that it will be safe for him to return to his special school in September, so local walks will be a lifeline.”

Aisling added that while she hasn’t said anything yet to anyone who isn’t practising social distancing, “the day is coming”. Her main message to people is ‘social distance’.

“Please consider others when out taking exercise, be it walking, running, jogging or cycling. Pass people in single file; cycle in single file,” she urged. “Don’t jog or run in between people trying to maintain a two-metre distance. Be considerate – many people are vulnerable.”