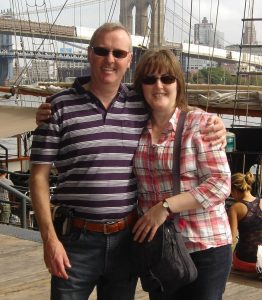 CAROLINE Whelan will be walking from Kilcullen to Athy this Sunday, 14 June, to raise funds for the Irish Cancer Society and cancer research specifically.

Caroline, who is originally from Athy and now living in Kilcullen, and is one of four sisters and four brothers, will be walking the 23km from her adopted town to her hometown to fundraise in memory of her brother Ben (also known as Bernard) who was lost to cancer last December at the age of 56.

Caroline explained that she heard about the various fundraisers people are doing during the lockdown. She said that she’s “out walking every day anyway” and thought she would walk somewhere and set up a fundraising page.

Her mum Peggy is still in Athy and Caroline hasn’t seen her in person since before the lockdown. “I figured as soon as the restrictions lift, I need to get home and see her,” said Caroline. “Then I just got a mad notion that right, well, when I’m going to see her why don’t I just walk over?”

Her sister Joan, who lives in England, will be walking with her from afar. “She has her own route picked out and, when I’m setting out, she’s going to set out as well. So, we’ll be keeping each other company on the walk!” Caroline said. “But I’ll probably have them all with me on the phone at some point.”

It’s not the first time members of the family will be walking together while in different places. A number of them had been due to take part in the VHI Women’s Mini Marathon on 31 May to raise funds, but the event was cancelled. Instead, family members including Caroline’s brother and sister-in-law in the States “all synchronised our watches and we all headed out at the same time and we all walked a 10k loop in our own areas”.

The response to her upcoming walk has been fantastic – Caroline launched the JustGiving fundraiser last Wednesday afternoon and, a day later, over €1,700 had already been raised of her €2,500 target – a figure that continues to climb. “It’s gone a bit bananas, it really has,” she said. “It’s brilliant. I’m absolutely delighted with it.”

She has also highlighted her thanks to gardaí in Kilcullen for their help and support, especially Garda Joanne O’Sullivan who will escort her on the morning.