Harrington hoping Millisle can give Murphy a Guineas double 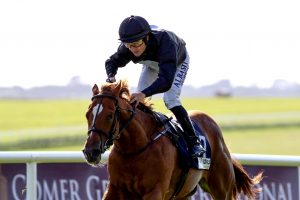 The Jessica Harrington trained Millisle is one of the favourties for the 1,000 Guineas at Newmarket today
Photo: ©INPHO/Peter Mooney

He has never before ridden Millisle but Harrington doesn’t see that as a problem, particularly as the horse has ran well in England before, and won at Newmarket last September.

“She’s done all her work and I’m very happy with her preparation,” said Harrington, while speaking on Paddy Power Media’s new podcast, From The Horse’s Mouth.

“She seems to be in good form and the great thing about her is she’s been to England already twice last year as a two-year-old and she more or less took it in her stride each time she went. She’s a very good traveller – really good traveller last year she was great – the only time she got a bit upset was in Salisbury when they took blood off her just before the race. But even that she still ran a good race there, but she was eating better when she went to Newmarket. We were lucky enough to get Oisin [Murphy] – he’s never sat on her but look, she’s very straightforward and hopefully he’ll get on great with her,” added Harrington.

Millisle, who is contesting favouritism for the 1,000 Guineas with Love and Quadrilateral, is stepping up in distance for the race. Her previous win at Newmarket was over six furlongs although her sire, Starspangledbanner, was a sprinter Harrington is confident that she will be able to stay the mile trip.

“If you look at when she won the Cheveley Park, she wasn’t going to win anything when they got into the dip and when she hit the rising ground, she stayed on very well and ran right through the line to the extent that Shane [Foley] had difficulty pulling her up. I trained her half-sister and she won over I think a mile and a half and she was placed in a Listed race over a mile and six. So I think there’s plenty of stamina in the pedigree. I hope [Starspangledbanner has put enough speed into her] so and she’s also a filly that will relax. I know she won over five furlongs twice last year before stepping up to six but in Newmarket they went so quick she actually relaxed and she’ll be dropped in behind I’d say a little bit and just get her relaxed to come home.

“The opposition all worry me right at this moment – they’re all a danger. Raffles Prize finished behind her in the Cheveley, Quadrilateral beat Cayenne Pepper in the Fillies’ Mile and she took quite a long time as well to get going that day so as a three-year-old whether she’ll want a bit further. Look, Love won the Moyglare here and is a Group 1 winner. Look at the moment they’re all a danger.

“Look the way she’s been working – it was sort of a bit stop go, stop go because originally she was always being aimed at the English Guineas. And then it sort of got into a bit of a muddle when we didn’t know when the English Guineas was going to be run. But we had her built up, we let down a bit and we built her up again – she’s a very straightforward filly. Actually last year she never ever worked with another horse – she only ever worked on her own. So this year she has been working with another horse so you know we sort of understand her and Seanie who rides her out every day definitely understands her,” said Harrington.

The race goes off at 3.35pm and it could be the start of a big week for Harrington as she also has the favourite for the 1,000 Guineas at the Curragh next Saturday, Albigna.