Dettori to team up with Naas winner at Ascot next week

FRESH from his impressive run at Naas Racecourse on the first day of the resumption of Irish racing, Ireland’s highest-rated sprinter Sceptical will pair up with Frankie Dettori in Ascot next week.

Amatuer jockey Joey Sherdian guided the four-year-old home in impressive style but due to BHA regulations he won’t be able to ride at Ascot next week. 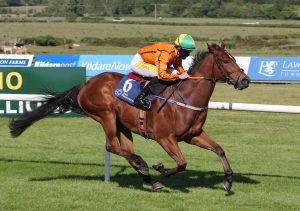 The Denis Hogan trained horse, who was bought for just £2,800, has now won his last four races in Ireland and showed on Monday that he has the same turn of foot on turf as he had when winning his three previous races on Dundalk’s all-weather surface.

The horses owners, Hilltop Racing, confirmed the jockey change on their Twitter page. 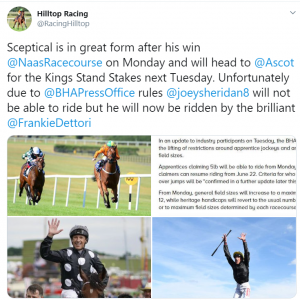 Sceptical currently lies second in the betting behind Battash but with those who fancy his chances after seeing his run at Naas will be buoyed by his partnership with Dettori.