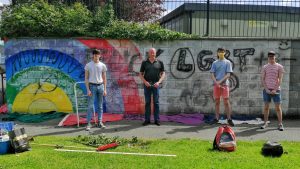 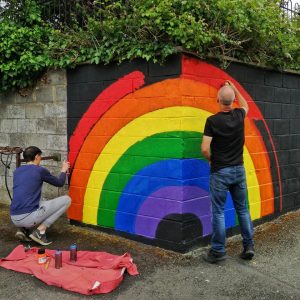 A GROUP of volunteers got together this week (10 June) to re-paint a rainbow on a wall in Newbridge that had been defaced by homophobic graffiti a fortnight ago.

The boundary wall of the Patrician Secondary School which had been painted in a rainbow to acknowledge Pride Week for last year had been defaced with a number of slurs and pictures.

Art teacher Kieran Behan at the school got a group of volunteers to assist after they first blacked out the offensive remarks and images two weeks ago.

Mr Behan had been particularly disappointed because of the efforts at inclusion made by the school which saw the rainbow flag flown “and Donal Og Cusack [former Cork hurling goalkeeper] came and spoke”.

“I wanted to get that wall re-instated, and support the lads,” he said.

“You can kinda get a flavour of what they have to put up with when you see this,” he added.

In an effort to do this, Kieran had made contact with the director of Kildare Youth Theatre Peter Hussey and they made a plan to tackle it.

“It looks well, even though we say so ourselves,” said Kieran who wished to acknowledge the assistance of volunteers Peter McHale, David Sisk, Joe Brown, Colin Smyth, and Peter Hussey.