Albigna could land a Classic success for Harrington and Foley

THE Jessica Harrington/Shane Foley partnership has been on fire in the first week back as Irish racing gets back up and running.

They enjoyed a three-timer on the first day of racing at Naas on Monday, with Foley also riding a fourth winner, and they enjoyed further success at Navan on Wednesday and then two winners at Gowran Park on Thursday.

They team up again on a number of occasions over the course of Guineas weekend at the Curragh and will stat the 1,000 Guineas as favourite.

Harrington won the 2018 renewal of the race with the brilliant Alpha Centauri, while Foley won the 2016 race on the Adrian Keatley Jet Setting and the pair will be fancied to join up for Albigna to win the race. 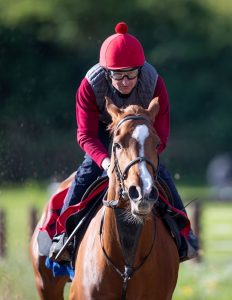 Shane Foley and the Jessica Harrington trained Albigna are likely to be the favourites for the 1,000 Guineas at the Curragh on Saturday
Photo: ©INPHO/Morgan Treacy

“I think on declarations there were 15 – I didn’t see draws or anything yet but she’s in great shape and I’m looking forward to riding her. She’s a very, very good filly, albeit she is a bit quirky and she has her own thoughts sometimes but when she does put it together she’s very, very good. She does [have her own way of thinking] – she’s a chestnut filly and in the Moyglare now she was in season and that and she got very warm and she wasn’t easy that day. Again in Santa Anita she was a bit awkward early and got herself back – look the track probably didn’t suit but that’s just her and the same at home – she does her work but If you change her routine she can get a bit nasty. The good ones always, some of them always have a quirk and she definitely does. But the fact is she’s very, very good,” said Foley, when speaking on Paddy Power Media’s new podcast, From The Horse’s Mouth

Of course, the Covid-19 pandemic means that the racing will take place behind closed doors but even without the atmosphere Foley says you can’t beat that winning feeling.

“It’s obviously not ideal but as far as the Irish racing bar its really big days the Galway Festival, the Guineas days there wouldn’t be thousands at the races anyway. Now I know it takes away the atmosphere – there’s not much atmosphere there at all but look it’s nice to start and I do get a kick out of it. So you can’t beat a winner no matter where it is now – Tramore or The Curragh or everything. You still get that winning feeling, the yard has that winning feeling, the owners, everyone’s still involved. You can’t beat winning really – I know it’s a bit surreal that there’s no-one there but you’re still a winner at the end of the day,” he said.

Foley and Harrington also team for the 2,000 Guineas on Friday evening and Foley is hoping that Free Solo might surprise a few people.

Look he’s a horse that doesn’t really excite you at home and he was the same last year and he went out and he impressed us in his maiden. That form got a boost, the horse that was behind him [Cormorant} came out and won a trial the other day – look he’s a horse that he’ll go on good ground, he’s been pleasing us in his work without ever exciting you and I hope he comes alive at the races, but he was quite impressive that day at Leopardstown – he surprised me a bit considering his home work was just okay so hopefully he can do the same,” he said.

Racing coverage begins on RTE 2 at 6pm on both evenings and you can download a virtual racecard here.