Siskin justifies the hype to land 2,000 Guineas at the Curragh

THE Ger Lyons trained Siskin battled his way to a hard fought win in the 2,000 Guineas this evening at the Curragh.

Jockey Colin Keane gave Siskin, who was unbeaten as a two-year-old, a patient and intelligent ride. At one stage it looked like he might get boxed in but with a furlong and a half to go he found a gap the horse showed there was no problem showing his turn of foot over the mile distance. 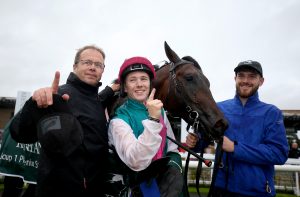 An emotional Lyons was lost for words in the immediate aftermath of the race.

“It’s a dream come through,” he said.

“It’s 30 yards hard graft. to win a Guineas was always  my number one. Delighted with the support we are getting from all the owners, the quality we are getting is improving year on year. Full credit to Colin Keane, he was out there on his own against a football team and him and the horse got it right, the horse is a legend and he bailed him. You don’t get a Guineas handed to you, he had to win it and the two of them were man enough and they stood up when it was needed.

“Colin is the best there is at the moment, he’s only a kid, he’s only getting going so he’s only going to keep improving.