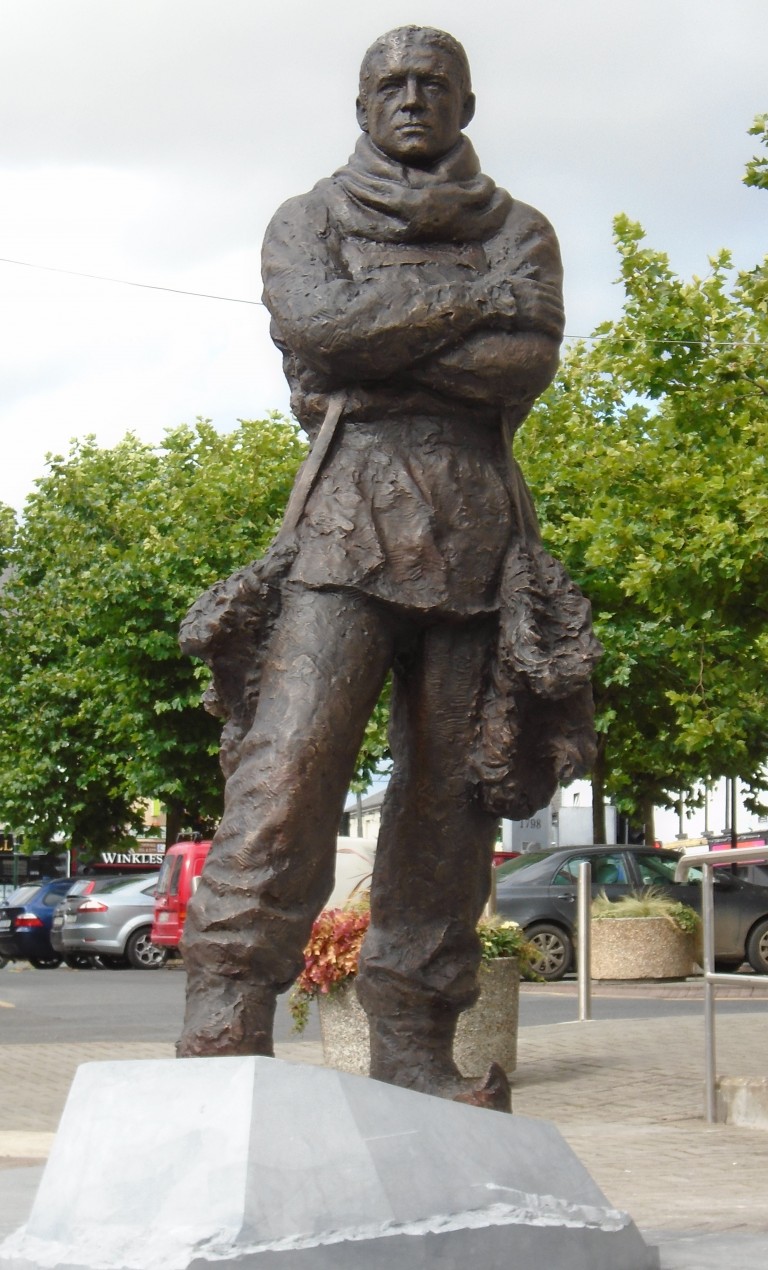 The statue of Ernest Shackleton in Athy

The fifth and final episode (Kindness) in the What would Shackleton do? podcast series was recently released, marking the end of a fascinating production which takes lessons from history and applies them to our current predicament.

Dr Juliana Adelman, Assistant Professor of History at Dublin City University, who combined with the Shackleton Committee in Athy to produce the series, described it as a collaborative process. Kevin Kenny, historian and Director of the Shackleton Museum, for example, was “helpful in terms of thinking about the themes and finding people to explore them”.

“These were all people that Kevin found to get involved,” Dr Adelman noted, adding that “it seems to have been really well received”.

“People who are, you know, already interested and engaged have found something maybe that they didn’t know or a new way of looking at a story that was familiar,” she said. “And then other people for whom Shackleton wasn’t of particular interest have, you know, suddenly found that… this story is really interesting and interesting in ways that maybe they hadn’t anticipated.”

Sir Ernest Shackleton, the famed Kildare-born Antarctic explorer, identified optimism, patience, idealism and courage as key characteristics in surviving the adversities life throws up. Speaking to the Kildare Nationalist recently, the explorer’s second cousin Jonathan Shackleton, an author, historian, lecturer and Antarctic guide, explained that his relative believed those characteristics “would help to get people through the ups and downs of life, and maybe more particularly for him, in polar exploration”.

The podcast series, themed on those four key principles, examines Shackleton’s expertise and methods and how they relate to the issues we’re facing at present. ‘Kindness’ was added over 100 years after Shackleton documented those characteristics, arising from the direct experiences of frontline health workers.

Dr Adelman explained that she had the idea for the series; the historian “of the 19th century and of science and medicine” was invited to attend the annual Shackleton Autumn School in Athy and said that she knew the basics but “became fascinated with aspects of the story”. When the lockdown began, she thought about isolation and how polar explorers could have something to say about that. Once she began talking to Mr Kenny, “it just became apparent there were so many more parallels that might be interesting to explore.”

Credit for the idea of looking at Shackleton’s four essential characteristics goes to his second cousin. “I think that worked out extremely well,” she explained.

Shackleton has been described as best in a crisis, as showcased in the Endurance expedition (1914-1917) during which the expedition ship was lost – he led his crew through what became known as one of the world’s greatest survival epics. Endurance became trapped and crushed by pack ice in the Weddell Sea and sank in November 1915. From this sprang a legendary story of survival – the men onboard managed to reach Elephant Island by lifeboat and Shackleton and five others left in search of help, undertaking a 1,300km trip to South Georgia on one of the lifeboats. The crew was rescued several months later.

Optimism, patience, courage and idealism are all demonstrated throughout that epic tale and others, traits applicable to a nation making its way through a pandemic. In the first podcast episode, Mr Kenny explained that as the explorers were on the ice, there was a theory that it was drifting north towards islands on the edge of Antarctica where whaling expeditions would visit. If that was true, by staying on the ice the drift would bring them towards somewhere they could possibly meet with whalers and organise a rescue. Each day, navigator Frank Worsley would look at their position (latitude and longtitude) and, as that began to show the theory was correct, spirits rose as the men could see that the situation was improving. One can see the parallel with the Covid-19 statistics broadcast to the nation every evening, charting the steady decline of cases and deaths as we move through the phases of reopening the country.

For Dr Adelman, two of Shackleton’s key characteristics in particular have stuck with her. “I think as a person essentially stuck at home with home-schooling grouchy and antsy children and two people trying to work around those demands… and not being able to see family and friends, I suppose optimism and patience are the ones that have stuck with me,” she explained. “The kindness one also stuck with me, Jackie talking about, you know, just trying to – in all of our frustration and stress and anxiety – to try to remember to be kind to other people in ordinary ways and just say thank you for things and acknowledge when things are difficult.”

Listeners can access all five episodes of the series on platforms such as Apple Podcasts, Spotify and Overcast, or by visiting shackletonmuseum.com/audio-visual.

“The series has been inspirational and the response staggering,” said Margaret Walsh, manager/curator, Athy Heritage Centre Shackleton Museum. “It highlighted attributes that are very relevant to the current pandemic, looking at the attitudes of Shackleton when facing challenges and disappointments makes you realise that if we take it step by step we will endure, we all comprise of those very same attributes, we just have to apply them to our own circumstances.”