With champion jockey Frankie Dettori on board, the half-sister to Alpha Centauri hugged the rail for most of the way around and at one stage looked like she might get boxed in but Dettori waited for the right moment to make his move and with two furlongs to go pulled away from his opponents and won with four lengths to spare in the end. 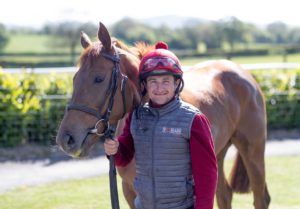 “I’ve conquered Ascot,” Dettori told ITV after the win completed the set of Group 1 wins for him at the Festival.

“I’m coming here for 30 years and for some reason or another I just never got the right horse in the Coronation Stakes. Jessica offered me this ride a while back and I was very excited about the ride. I had a good draw, a good split, the filly was beautifully prepared by Jessica, she showed a good turn of foot. I’m thrilled, I can finally say I won every Group 1 at Ascot, it’s not an easy achievement,” said Dettori.

After winning over a mile, Dettori is unsure about where Alpine Star could go next. The Oaks, run over a mile and a half, might be a bit too far for her but Dettori has no doubts about the horse’s quality.

“She would definitely get a mile and a quarter. She did all her best work there at the end. A mile and a half, I really don’t know. I’ll leave that to the owners and Jessica to talk about.

“I would say a mile and a quarter would be her best distance but I will that to Jessie. She is a good filly and she won in good style, by four lengths so you would have to say she is up there with the best fillies around at the moment,” said Dettori.

Trainer Jessica Harrington also spoke to ITV after the race and was delighted with what she saw.

“I was down in Kilkenny at a friends and you probably could have heard us in Ascot, we were shouting so loud. I just couldn’t believe how well she did it,” she said.

Harrington is unsure as to where Alpine Star could go next.

“I have no idea. It’s up to the owners and then we’ll see where we go. I’m absolutely delighted with what she did today. Look, she was the only filly in the field that hadn’t had a run but her attitude was amazing, she and Frankie did an amazing job. I’m really sorry for Shane Foley, who had ridden her in all our races, that he couldn’t be there to ride her,” she said.

Physically, the horse is very different to her famed half-sister but anything that Alpine Star lacks in physique she makes up with determination.

“Alpha Centauri was a big monster. Alpine Star is not a very large filly but she has a very, very big heart,” she said.