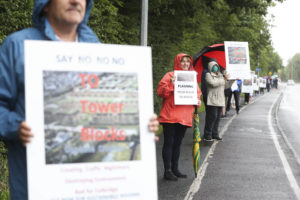 Residents of Crodaun Forest Park in Celbridge turned out in force today (Tuesday) to protest at plans to build what they describe as “Tower Block” apartments in the town. Turning out in numbers along the Celbridge – Maynooth Road this afternoon they asked people to oppose the high rise apartment blocks that would destroy the Maynooth/M4 access to Celbridge.

This contentious housing development is currently with An Bord Pleanála . Submitted by Crodaun SHD Development company it proposes six storey apartment blocks on the Celbridge Maynooth road. The proposed development is submitted as a Strategic Housing Development. 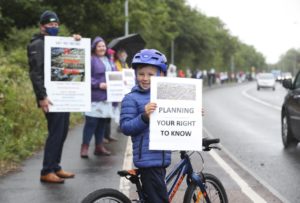 Organising themselves as the Crodaun Action Group, they have sought and gained support from local TDs and councillors and have worked closely with the Celbridge Community Council on mobilising opposition to the development in its present form. Funding to engage professional expertise was raised through a GoFundMe appeal.

Anger increased when after dark last week posters calling for opposition to the proposal were removed by persons unknown. “These posters were designed to help the public understand the extent and nature of this development. The only purpose on taking them down was to limit the number of people who might object to the development “ observed Peter Finnegan of the Crodaun Action Group.

“The notice of the development was issued after the Covid 19 lockdown and that in itself is questionable as most local government planning activity was suspended during that period.” 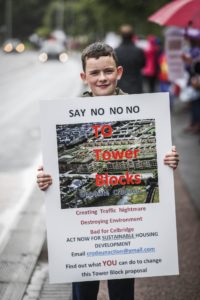 Last weekend members of the Action Group marched and met people at shopping centres and on Main Street Celbridge . Over 300 people asked for leaflets explaining how they could submit objections to An Bord Pleanála. Brendan O Sullivan organised the public awareness campaign and gave feedback on the response.

”We got great reaction and support from people last weekend. Many had not heard of the development but were appalled at the idea that six story apartments could be built in Celbridge. People feel Celbridge needs investment in infrastructure. Many commute to Dublin for work and are concerned at the added traffic chaos that the Development would create on the road to the M4. There was also concern from parents about the danger that could be faced by the 1400 children who cycle and walk to school along the public path that will have an additional four entrances coming out from the development. There are definite health and safety concerns arising from the way the development is designed. “ 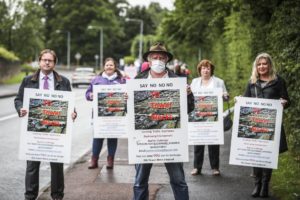 Mr Finnegan was quick to stress : “ We are in favour of housing but not of six storey tower blocks in Celbridge. The SHD process is not transparent and denies community participation in the planning process . Sustainable and reasonable housing development is feasible on this site but not if it proceeds as currently designed.”

The closing date for submission of objections to An Bord Pleanala for this development is Monday next 29.. The concerns of the wider community in Celbridge about the development relate to the height and location of the “tower blocks”, the additional traffic congestion on the road to the M4 and the secondary schools, the safety and danger issues arising for cyclists , and the potential environmental impact on the river which is a protected drinking water resource for the Leixlip Water treatment plant. In preparing the submission from Crodaun for An Bord Pleanala residents learned with concern of a massive unauthorised landfill that has not been dealt with and that effectively is contributing to flooding on land around the development site.

Click HERE for lots more photos from the protest