THE Dubai Duty Free Irish Derby taking place at The Curragh this Saturday 27 June is set to be one of the most competitive in recent times.   Nineteen horses remain in the race following this morning’s final forfeit stage. Declared runners will be published on Thursday at 10am.

Aidan O’Brien who has won Ireland’s premier Classic thirteen times will have a strong team to represent him including recent Royal Ascot winner Santiago.

His son Joseph will try to win the race for a second time having won with Latrobe in 2018. He will be represented by the unbeaten Crossfirehurricane, while New York Girl who finished fourth in the recent Tattersalls Irish 1000 Guineas was added into the race as a supplementary entry  at a cost of €50,000. He also has Curragh recent winner Galileo Chrome in the race. 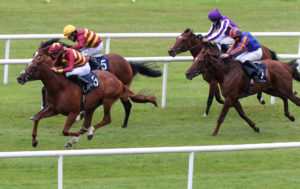 The Joseph O’Brien trained Crossfirehurricane (3) is one of the favourites for the Dubai Duty Free Irish Derby at the moment
Photo: ©INPHO/Caroline Norris

Fiscal Rules is set to represent Jim Bolger, who has won the race twice with St Jovite and Trading Leather.

Jessica Harrington could attempt to become the first female trainer to win the race with Gold Maze who finished runner up in the recent Coolmore Ten Sovereigns Gallinule Stakes.

This year’s race will be particularly significant for trainers with first Dubai Duty Free Irish Derby runners, Donnacha O’Brien with Sherpa, Emmet Mullins with King of Thrones, Ger Lyons with Chiricahua and Andy Slattery with Sunchart.

Multiple Group One race winners Magical and Magic Wand head the twelve entries for the Alwasmiyah Pretty Polly Stakes, the feature race this Sunday. Other notable contenders in the Group 1 contest include the Jessica Harrington trained Cheyenne Pepper, Hamariyna trained by Michael Halford and the Ger Lyons trained pair of Roca Roma and Even So.  New York Girl also holds an entry. but is more likely to run in the Dubai Duty Free Irish Derby.   The Denis Hogan trained pair of Sceptical and Make A Challenge feature among the eleven entries in the Weatherbys Ireland Greenlands Stakes, also taking place on Sunday

Entries for all three days can be found on www.hri-ras.ie

The Dubai Duty Free Irish Derby Festival will be run from this Friday to Sunday behind closed doors due to Irish government protocols.