A big man with a big future

AT 6 foot six inches, 16-year-old Oli Oleksiewicz cuts an imposing figure and he is putting every inch of that frame to good use as he gets closer to a professional soccer contract. 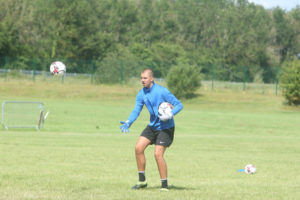 He has come a long way since he was back up goalkeeper for Kildare in the 2017 Kennedy Cup. Then, he was playing for his local team, Athy Town, and he has already packed in a lot of experience since then.

He has played in the DDSL with Peamount Utd, Rathcoole Boys, in the underage National League with Carlow/Kilkenny and senior football with St Patricks CY in the Leinster Senior League. Along the way he has caught the eye of various coaches with his teams and at different academies but it was it was his time that the Randz Academy, an academy ran by Ireland’s number one Darren Randolph, that really pushed him into the spotlight. Since then, he’s had trials with Manchester Utd, Peterbrough and Reading in England and Cracovia in his native Poland.

His is a story of how hard work and determination can elevate a player to a different level.

“I didn’t get a lot of gametime at the Kennedy Cup but I think that really prepared me, it gave me a lot of motivation to train harder and work harder. From that year on, I went to play in Peamount and that was a good experience. I kept training as well, I attended a few academies, I was doing Just4Keepers and SALI as well. I was putting the work in, basically training daily.

“I moved on to Rathcoole Boys, which was a step forward again. From there, I joined Randz Academy, and I got to know Darren Randolph there and I was working with him and got a lot of advice. That’s where I got scouted for the Man Utd trial,” said Oleksiewicz, whose family moved to Athy when he was he was a one year old.

“As soon as I found out that I was invited to Man Utd I was absolutely buzzing for an opportunity like that to come. By then, I had signed for Carlow/Kilkenny in the National League and that also came from the Randz Academy because one of the coaches there was with Carlow/Kilkenny. I went for a trial and ended up signing with them, I was 15 at the time signing for their Under 17s and that was a big move for me as well because it was my first chance in the League of Ireland. It was a big boost for my confidence.

“I was over with Man Utd for a week. I was training with the U18s and the U23s and it was amazing. We got to eat around the first team players and with the U18s I was playing with people like Mason Greenwood and Brandon Williams. The quality of players there was absolutely amazing, it was a dream come through.”

Randolph himself has been a big help to Oleksiewicz.

“I’m still in contact with him and he’s given me loads of advice. He invited me to a game, Middlesbrough against Leeds and that was a great experience as well and he’s definitely been a big inspiration for me,” he said.

Oleksiewicz returned from his Man Utd trial with plenty of detail on what to work on.

“They told me that I need to improve on my feet and my strength. They said they are two minor things but you have to be at a very high standard. I took that in my stride, I contacted the guys from Training 1 to 1, they normally just do outfielders but it’s all about footwork. I’ve been working with them over the last year and things like my speed and footwork have grown immensely from that.

“I had a trial with Cracovia, a team in Poland, it was a first team trial. They are quite a good team who played in the Europa League this season. It was a very high standard and that was my first experience with a senior team. They told me that all I lacked was senior experience, they said that my feet were better and that the strength was sorted as well. I was working on my strength work with Dean Higgins here in the KDUL, also Peak Performance, and he helped me massively to build up my strength.”

After working with senior players in Poland, he decided when back in Ireland that he needed to make the step up to senior football.

“When I came back from Cracovia, I signed for St Patricks CY in Ringsend and I’ve been getting minutes for their first team in the Leinster Senior League and also their reserves, they are another high standard team and the coaching has been brilliant,” he said.

Another trial followed with Championship side Reading and he hopes that a deal can be concluded once their extended season is completed.

“I had a trial with Reading in December and again, that was like a dream come through. Everybody was so nice to me. I was training with their Under 18s and Under 23s and they invited me back to another trial in February and that’s when I played a few games. The first game I played I conceded one goal but I saved a penalty and I think I did well. I was playing Under 18 even though over in England I am under 16 because they use a different calendar than here in Ireland. I played two games and I think I did really well and the feedback was really positive. Since then, there have been numerous teams calling and asking about me and showing an interest. We’ve been in contact with Reading and a few other teams.

“From the first trial, I had some positive feedback but also a lot to improve on and I’ve worked on what I had to do and I’ve improved to get to the place I want to be. Even if I sign in the summer it’s only the start of where I want to go,” he said.

Although Oleksiewicz is very much focussed on his own playing career, he also intends to explore the possibilities that coaching may open up for him and last week he helped with the goalkeepers as the various Klub Kildare teams returned to training in Tougher Park.

“Coaching for me is a great back up plan, especially starting so young. I’ve seen the path that Jamie (Smith, Klub Kildare Director of Coaching) took and I’m here coaching with people like Oisin Hand and Alex Conlon. It’s definitely helping me, it’s a different experience and a different side to the game. I’d like to definitely get involved in it because I think it will help me as well,” Oleksiewicz.

Oli Oleksiewicz is going to be a big man but he is going to have an even bigger future in football.