A game that nobody who was there will ever forget

ON this day in 2010, the most emotionally-charged Kildare game ever played took place in St Conleths Park.

Earlier in the day of 26 June 2010, Lieutenant-General Dermot Earley snr was taken to his final resting place. Rarely has Newbridge seen such a crowd for a funeral. People travelled the length and breath of the country, and from beyond, to say their final goodbyes to the GAA legend and to that man that became Chief of Staff of the Defence Forces.

His loss was particularly keenly felt in his adopted county of Kildare and his native Roscommon but of course, most keenly of all within his family. 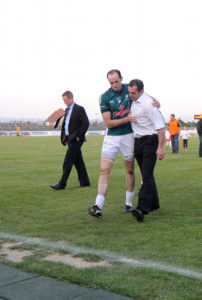 Dermot Earley leaves the pitch with his brother David after the game against Antrim ten years ago today
Photo: Adrian Melia

It was a tragedy for the Earley family to lose somebody who at just 62 should have had years left as the cornerstone of their family. It was a time of great loss for them and everybody would have understood if Dermot Jnr decided to miss Kildare’s Qualifier tie against Antrim in St Conleths Park that took place on the same day that he buried his father.

Instead, Dermot did as he always had, he put on his boots, pulled on his Kildare jersey and honoured his father in the best way he knew, by trying to win a football match for his county.

That Kildare only managed a draw against Antrim that evening doesn’t matter a jot. The lasting memories from the game are of Dermot lining up shoulder to shoulder with his team mates before the game as the packed crowd joined in a minute’s applause and the almost shocked awe that Dermot could once again lead the fight for his county in the midst of the most tragic personal circumstances. 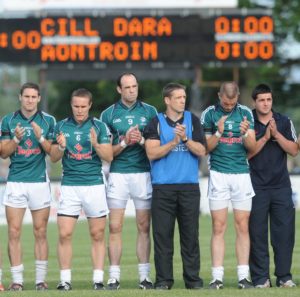 Dermot Earley and his Kildare team-mates join in the minutes applause for his father shortly before throw in against Antrim
Photo: Adrian Melia

After the game, his team mates and manager led the tributes to the two Dermots, including Johnny Doyle, who knew the family since his days spent with Dermot Jnr in the Patrician Secondary School.

“On a personal level you would be hurting for Dermot and his family. I’d know them all well, I went to school with them. They are a great GAA family. They were talking during the week about Christy Ring being carried away by the Rackard Brothers but they will talk about what Dermot Earley did today for this team. People will go home and it will be an iconic GAA moment, what he did for his county today, and we shouldn’t forget that. It’s a measure of the man, his father was a great man but his son is right up there with him,” said Doyle. 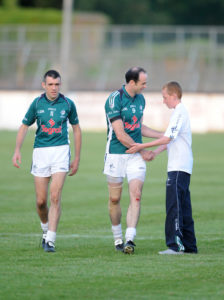 Dermot Earley is thanked by a supporter as he leaves the field with his great friend, Johnny Doyle
Photo: Adrian Melia

Manager of Kildare at the time was Kieran McGeeney and he explained that they were willing to move the match but that the Earley family were insistent that it go ahead as scheduled.

“We rang Dermot and talked to his mother,” said McGeeney.

“All they talked about in the wake, all they talked about in the chapel was wanting us to go out and give them something to smile about this summer and I hope that we can still go on and do that. Emotions like that can go either way, you don’t want to play on it. It’s a very personal thing, it’s their father, it’s their brother, it’s their husband and you don’t want to cheapen stuff like that with sport. I suppose in the bigger picture, we’re all lucky enough to have family and people who love us who let us put it number one and it was shown again what the Earley family think of it.

“I’ve always maintained that it is not always the colour of the jersey on your back. I know people always get very parochial about the GAA but it is the men who climb into the jersey and play no matter what colour is on their back. They’re men and Dermot Earley to me is that type of man. Representation, representing his county, representing his country is very important to him and he doesn’t take that kind of thing lightly and that showed out there today.” 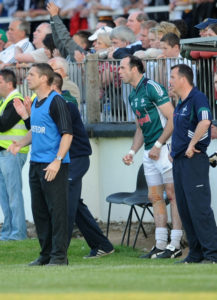 Dermot Earley urges Kildare on from the sidelines after being substituted
Photo: Adrian Melia

“Heroes aren’t born but Dermot Earley surely kicked a football when he was in the womb. If the memory of his late father wasn’t enough to inspire the footballers of Kildare, Earley stood tall among his teammates on Saturday night. 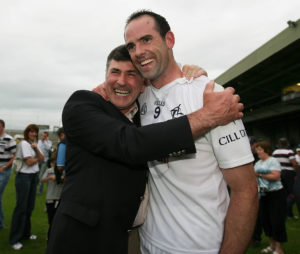 Dermot Jnr and his sadly departed father after a Kildare game in 2008
Photo: INPHO/Lorraine O’Sullivan

“Though his father might have wished it, we wondered if the human spirit was strong enough to will it. For 70 arduous minutes Dermot Earley fought a battle for the brave and though his courage couldn’t guarantee a Lilywhite victory, his presence alone left an indelible mark on all who witnessed it.

“The football seemed immaterial yet the game took on a special meaning. And in its own fateful way, a draw was a fitting tribute to the man whose memory lingered in the Newbridge night air. Dermot Earley Snr played in pursuit of something greater than victory. That is why his memory amounts to so much more than a roll call of games won and lost.

“At his funeral mass on Saturday morning, Let General Dermot Earley was celebrated as a great leader of men and by taking to the field later that evening, his son paid the greatest tribute of all – giving hope and inspiration to the next generation; a hero to replace the one just departed.

“After a sustained round of applause from a packed St Conleth’s Park when his name was announced in the starting 15, Earley was a crucial part of the midfield axis which propelled Kildare in a dominant first half display,” said Coffey.

There will never be an occasion like it again at a Kildare game and it’s something that anybody who was in St Conleths Park ten years ago today will remember forever. 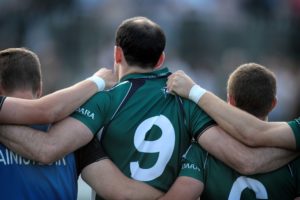 Dermot Earley lines up with the Kildare team before the game Photo: ©INPHO/Morgan Treacy