GORTHAGANNY – ‘The Little Field Of The Sand’ lies not too far from the Roscommon town of Ballinlough. In 1956 the late Peadar Earley founded a club there in honour of a young local republican killed in action in the War of Independence, Michael Glavey.

Maybe it was a bit more than coincidental that a club founded in the name of one fallen hero should spawn another. By any standards Gorthaganny is a beautiful place with the sandpit to the rear of the Earley family home and Gorthaganny Lake a few fields down below.

It was in those fields, most of them the property of friendly neighbours, that the young Dermot Earley practiced the skills that were to make him a legend in his lifetime in the world of Gaelic Football. It is not the intention of this piece to eulogise them further. 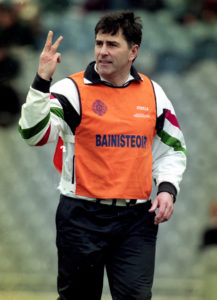 My personal memories of Dermot are varied. I recall interviewing himself and Dermot Junior in their lovely home in the run-up to the ’98 All-Ireland Final in which the younger man was a participant.

Oddly enough I recall writing in my piece that they were more like brothers than father and son. It was no great surprise to me therefore to come across a passage in Dermot’s biography ‘The Earley Years’ where he alludes to his own father making a similar pronouncement regarding their particular relationship.

“Sure aren’t we more like brothers,” remarked the late Peadar – a highly unusual statement coming from an Irish parent of his time. Dermot and Der were obviously carrying on the tradition.

His advancement in the Defence Forces was rapid and that was as it should be. During his period as manager of Kildare he had just attained the rank of full Colonel. At the time in our club in Allenwood – he had managed the seniors for a season or so many years previously – but more of that anon. One of our under-10s asked one morning: ‘Would Earley train us?’. I laughed when I heard the urchin – now a senior club footballer – refer to him as Earley. As Fr Leo Morahan said one time: ‘When they recognise you by the surname, only then you have it made in the GAA.’

I asked Dermot, never dreaming that he’d so readily acquiesce. Out he came that morning in full Kildare managerial regalia, strode into the under-10 dressing room and with a clarion call of ‘Allenwood are we ready? Let’s go!’, he led his tiny troops out to the underage pitch like the Pied Piper. His session was remarkably similar to what a couple of us mentors had been doing with them and they were slightly disappointed in that. I suppose they thought he’d have them out running the infamous laps. When one of them remarked that they do that every Sunday morning, Dermot just smiled enigmatically and replied: ‘Now you see how much your Dads know about training a team.’

Later on he posed for photographs with the team, their parents and siblings; giving of his time and that marvellous handshake with equal generosity.

In later years he became analyst to my match commentaries on local radio, KFM. All I had to do was squeeze Dermot’s elbow at a break in play and he recalled the movement that led up to the score or free with pinpoint accuracy going back at least ‘three plays’ or more – something to which I could never hope to aspire. His summations were always incisive, but above all positive.

He had a sense of humour too. Having arrived late – his plane got delayed, when in Wales on military business – for a game with Derry in Celtic Park, he was refused permission to bring his car – as I had been an hour earlier – by the same stout middle aged man who had charge of the gate.

Normally Dermot’s face got him a warm welcome anywhere in the GAA world. As Dermot and I were lacking the relevant car passes we had to make the long walk around the back of the goal area in the stadium – I with my commentary paraphernalia in a heavy bag and Dermot racing against time.

When half-time came he had done about ten minutes work and was more or less gathering his composure.

“I’m reminded here today of a story an old Sergeant Major told me when I was a very young officer. ‘Sir,’ he said, ‘the nature of our organisation dictates that we must entrust every dog and devil with a gun. But Sir you have to be very careful who you give a set of keys to. Whatever it is about keys they seem to go to fellows’ heads and they become fierce important.’”

We both felt on that gate, that day we had met that soldier.

Dermot is no longer with us now and I’m reminded of a piece in the foreword of the recently penned autobiography of the great English rugby player and scholar, Andy Ripley, who passed away last week also, coincidentally at the age of 62.

Of debilitating illness Ripley had this to say: ‘Dare hope? We dare. Can we hope? We can. Should we hope, we must because to do otherwise is to waste the most precious of gifts given so freely to all of us by God. So when we do die it will be with hope and it will be easy and our hearts will not be broken’

To Dermot’s mother Kitty, to his beloved Mary, to his sons, daughters and indeed to all family, we know that your hearts are broken now. But as Ripley put it, there is hope and Dermot had so much of it.

Written by John Roddy and first appeared in the Kildare Nationalist on 29 June 2010.