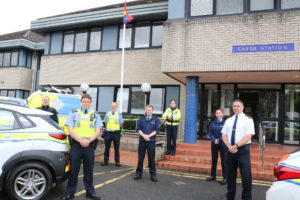 It was an historic day at the Kildare Garda Divisional headquarters yesterday as the Pride Flag was raised in support of the LGBT community.

Community Garda Gary Cogan and Garda Elaine Byrne, Naas garda station coordinated the initiative which was supported by Superintendent Oliver Henry of the Naas District and other gardaí.

June is Pride month and to coincide with a much different Pride Day festival, virtual pride events were being held around the country to celebrate Pride.

The Pride flag flies proudly outside Naas garda station, in addition to the TriColour flag.

Prior to the pandemic, Athy Pride were hoping to have their first Pride Parade in the south Kildare town and gardaí were supportive of the event, however, as restrictions were put in place, the Athy Pride was postponed and replaced with virtual celebrations. 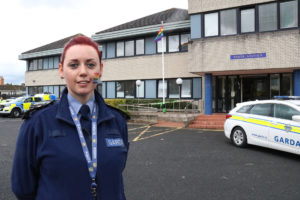 Garda Elaine Byrne told EmergencyTimes.ie “We wanted to have some sort of a visual representation and Athy were hoping to have their first ever pride this year but with the pandemic obviously it’ll be next year so I was hoping to get involved with them with my colleagues to help them out wherever we could, and because again we can’t do too much with the pandemic and restrictions, we said if we can at least fly the flag just for some visual representation. We invited people over and obviously maintaining the social distance just to show people that just because we can’t get to march together, we’re still coming together to celebrate pride.”

Plans for the flag raising happened in a short time and efforts were made to source an extra flagpole and a Pride flag for the occasion.

Garda Byrne is a Carlow native and a member of G-Force, the LGBT Social network within An Garda Síochána which is headed up by Inspector Paul Franey in Dublin. The G-Force AGM was to be held to coincide with Pride month but that too was postponed, however, members are happy that events will return to normal soon and will gather to hold their meetings once again. 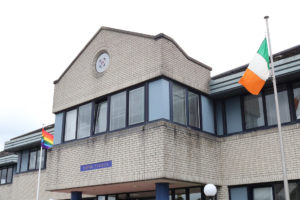 “I was in touch with Inspector Franey about getting the Pride flag, and this one is actually his, he loaned it to us, so thanks again to him for that and hopefully now we can get things going again with G-Force and I get a few more bits like this done around the place. Community Garda Gary Cogan has been great, he managed to source another flagpole for us, he’s been so supportive and Superintendent Oliver Henry as well was completely supportive and everybody in the station is being just so lovely so I’d just like to say thanks to everybody for their support, we really appreciate it”.

Last year, An Garda Síochána published its ‘Diversity and Integration Strategy 2019-2020’ and the LGBT communities are included in that among other diverse groups. The strategy also coincides with the introduction by An Garda Síochána of a `working definition of hate crime` to ensure that their Policing Plan commitment of delivering a victim-centred policing service, focussed on keeping people safe, protecting the most vulnerable and providing a consistently high standard of service is met.

This strategy is based upon five strategic principles, wherein organisational objectives are established, and achievable outcomes identified to permit monitoring of the strategy, internally and
independently. 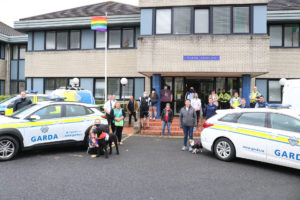 Naas District Superintendent Oliver Henry is delighted with the work in which Gardaí Elaine Byrne and Gary Cogan of the Community Policing Unit were doing within the LGBT communities in the Naas District and said it is a statement of their outward support for the LGBT community. “We are eager to engage with all sectors of the community and we work in partnership with them going forward and I think flying the pride flag along with the Tricolour is a statement of our outward public support for the LGBT community. We work with all sectors of our community within our own force and are very representative of society and diversity within that and we’re able to grow that into the future” he said.