The teams actually met four times that during that 2010 summer but after Kildare beat Dublin in the opening round, the Dubs came through the back door and the counties were paired against each other once again in the last eight stage.

The first game was played in Newbridge and gave notice of what to come. Kildare had the better of a superb contest and led by five points going into the last minute of normal time but a late Harry Dawson goal followed by two injury time points sent the game into extra time.

Fergal Conway, Fionn Dowling and Padraig Fogarty scored early in extra time but Dawson was superb for the visitors and scored the last three points of the game, to bring his tally to 1-7, and leave the game in a tie, 0-16 to 1-13.

The replay was set a week later in Parnell Park and was once again a high class affair. Kildare started well and led by a Padraig Fogarty goal at half time but Dublin came back into it during the second half.

The game flowed from end to end with some wonderful scores at both ends but Kildare looked set for victory when Sean Hurley put them two points ahead in the final minutes. However, Dublin were able to find the crucial late points, including a last gasp equaliser by Adam Caffrey, to send the game to extra time.

If anything, the quality of the extra time period was even higher. Two points apiece in the first half left the teams tied again at half time but Dublin went ahead early in the second half when Phil Ryan hit the back of the net from a penalty. Kildare responded with a penalty of their own from Kevin Feely but Ryan point left the Dubs on the verge of a semi-final place.

But Feely stepped up to be the Kildare hero and kicked a simply magnificent levelling point to leave the final score at Kildare 2-10 Dublin 1-13.

The teams had to wait for a month for the second replay due to the Leaving Cert and Bryan Murphy’s team finally got the better of Val Andrews team in Navan.

Paul Cribbin was superb on the night and kicked five points in a 1-13 to 0-13 win. It certainly wasn’t easy though and eight points from Ciaran Kilkenny kept Dublin right in the game until the very end.

Another first half Fogarty goal helped Kildare into 1-7 to 0-4 lead at half time but with Kilkenny to the fore, the Dubs halved that lead early in the second half. 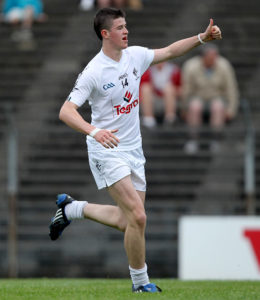 When Dublin cut the lead back to a single point in the final quarter another draw looked a possibility but scores from Fionn Dowling and Marcus Duke pulled Kildare clear. The winners still needed a late save from Mark Donnellan to deny Jack McCaffrey a late equalising goal.

Although Kildare came through the game, the efforts required took their toll and five days later they surprisingly lost a semi-final to Longford.

However, the memories of that trilogy lives on. Just look at the quality of player involved. The vast majority of Kildare players over the course of the three games went on to play senior football for Kildare and it was the first time that the likes of Paul Cribbin, Sean Hurley Kevin Feely and Padraig Fogarty really came to the wider county’s attention. As many as five or six from that squad could feature for Jack O’Connor later in the year once the inter-county season resumes. 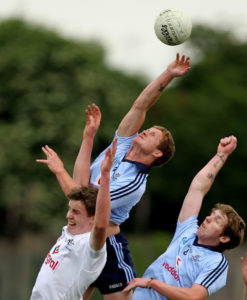 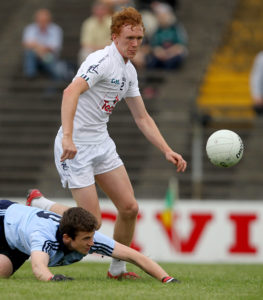 Paul Cribbin was superb over the course of the three games
Photo: ©INPHO/James Crombie 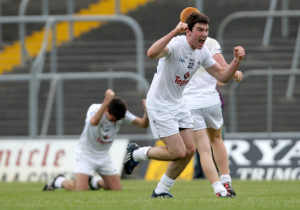 Ciaran Kilkenny and Jack McCaffrey are the stand out names in the Dublin teams but the likes of Harry Dawson and Adam Caffrey were superb during these games as well.