KILDARE hurling manager David Herity has described the Christy Ring Cup format in this truncated season a ‘kick in the teeth’ for his players, who have been training since last November. 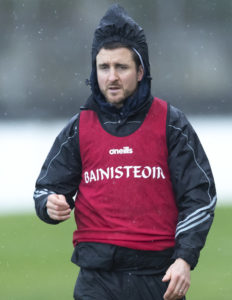 As it stands, Kildare are due to play Offaly in a knockout game on the week ending 25 October, the semi-finals are a week later and then the final of the competition is due for the week ending 8 November.

Herity can’t understand why there can’t be more time allocated to the competition and says that it will turn players away from hurling in counties at Christy Ring level.

“It’s just not good enough,” Herity is quoted as saying on Rte.ie in an article written by Damian Lawlor.

“This is not about us getting a hard draw and having a moan. Our group submitted an alternative fixtures plan, so we offered an alternative, but it didn’t see any light. This is about the bigger picture. We started training on 3 November last year. We have 35 on the panel and we are trying to bring on younger players too.

“There is massive work going on at underage level in parts of Kildare and we are trying to tap into that and make the county approach more attractive.

“We are looking at the likes of last year’s county minor team that lost the Leinster semi-final to Kilkenny and we are also drawing from the Naas team that is coming through at senior level and clubs like Ardclough, who have fine talent emerging.

“I fully understand the pressure the GAA is under with the pandemic and all the boxes that they have to tick, but to have our championship season done and dusted in one game and the whole competition effectively ran off in three weeks is hard to take.

The GAA has already handed clubs an 11-week period to get their competitions, a window that has been welcomed by all.

Herity went on to question whether the GAA are serious at all about developing hurling in the weaker counties.

“Are we really serious about developing the game at all? As things stand, it’s a kick in the teeth for lads who have been training all year,” he said.

The former All-Ireland winning goalkeeper believes there is still time to change the structure and feels he has a workable format.

“If you win two, then straight into the semi-finals you go. If you win one and lose one, it’s the quarter-finals. If you lose two, it’s into relegation territory. It will all still be played with the minimum fuss anyway.

“I understand the inter-county senior football teams have to make do with just one game also, but there are 32 of them. There are only eight in our section.

“And if there are group games for the Joe McDonagh, there should be for the Ring Cup too.

“I’m telling you, most of the teams at our level are footballing counties. For any young hurler coming up through the ranks, he will look at how this is being rushed through and any hope we have of attracting him to play hurling will fade.”

The Kildare hurlers have gone through a massive period of change in the past two seasons.

Herity went on to explain that Kildare have lost players in the past because of the competition structures. Kildare won the Christy Ring Cup in 2014 and 2018 but there was no automatic promotion and Herity said players walked away because they became disillusioned by the whole thing. He called on the GAA to act quickly before the same thing happens again.

“I would call on the GAA to have a rethink. I’m not having a go at them; they have had a tough job to fit everything in. But is it possible to add in another week and give the lads that play at this level a lift, maybe a feeling that they are not an afterthought? Give the competition a bit more profile. A few more column inches.

“Our fellas just can’t believe it. I feel like I have to say something. I can’t just let this pass.”