KILDARE GAA chairman Mick Gorman insisted at tonight’s county board meeting that neither the the senior football or hurling teams will be training ahead of schedule. 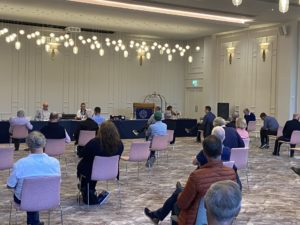 County teams training ahead of the permitted date has been a hot topic of late and although no team has yet been caught, rumours abound of secret training sessions for county teams around the country.

Gorman insists that won’t be the case in Kildare and that both Jack O’Connor and David Herity are fully respectful of their players’ club commitments.

“I just want to put it on the record and everybody to be very clear, both Jack O’Connor and David Herity have been fully supportive of that it is club time and that the weeks leading up to 17 October are club weeks,” he said.

Kildare’s Senior and Intermediate football championship finals will be played on the last weekend in September and the Senior Hurling final will be played on the following weekend. That will give the inter-county teams at least three weeks to prepare for their respective first games, on the the weekend of the 17 October for the footballers and a week later for the hurlers.

“Apart from giving the county managers a bit of space, we have to leave time for any replays so that is why there are no games down for the weekend of 10 October. Hopefully both managers will have at least three weeks with their panels before their first competitive game.

“The minor footballers and hurlers are both in the same situation, they will not be interfered with in any shape or form with their club games,” said Gorman.

The St Laurences clubman said that it is vitally important that the county acts as one that a situation never develops within the county whereby it is the county team versus the club teams.

“There is no way in the world that there is any divide between the clubs and the county, we are as one. I’ve seen some stuff come in today from the CPA, I would hate to see that it would ever become an issue in Kildare – that there is a divide there.

“I have to give credit to the management teams of the senior footballers and hurlers, they stayed in constant touch with the players through the lockdown, they’ve worked with them. The senior football management team had a meeting last night in Newbridge with the players to see if they are alright but there will be absolutely no collective training or anything else going on when they are still involved with club games,” said Gorman.