EAMONN Callaghan played more games for Kildare than any other player across his 17 year inter-county career but it’s the famous ‘Newbridge or nowhere’ game played on this date two years ago that he picks out as his favourite. 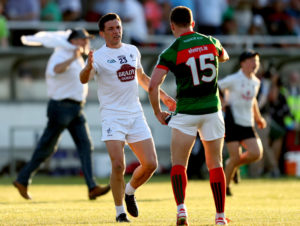 Callaghan’s underage career with his county was well before the era were Kildare could match any team in Leinster although Kildare came mightily close to achieving something momentous when the Naas man was at his peak during the Kieran McGeeney era they always fell just short.

Callaghan explained on the Mick and Mc’s GAA Football Podcast that he had never experienced anything like the celebrations on the pitch after the final whistle.

“It was probably my most enjoyable game. I’d be one of the few lads in Kildare that doesn’t have anything. I don’t any Leinsters at underage, nothing. Most of the lads have a minor medal or there are the lads who won an Under 20 All-Ireland or there were some of the older lads who won a senior Leinster back in 2000. I never had that moment where there was just pure celebration after a match and a that Mayo game was it for me. It was fairtytale stuff, because I knew it was my last year as well and to have to have moment in Newbridge was just class,” said Callaghan.

Looking back over the week leading up to the game, Callaghan said the whole thing played out left Kildare with no option but to turn up and fight.

“I’d say Mayo were raging at Croke Park, they had to have been. If there was none of that and it was just played in Newbridge, no hype no nothing, I don’t know what way that would have went. The whole build up to that game forced us to come out and fight, we had to. It was made for that to happen, it really gave us something to play for. I’m not saying we wouldn’t have turned up if that hadn’t happened but the whole country was talking about that. It was just mad that Croke Park let that go on for so long throughout the week,” said Callaghan.

Although Croke Park eventually backed down and gave Kildare their rightful home draw, they dug their feet in for a long time and Callaghan said that Kildare players had agreed that they would forfeit the game if neccessary.

“It got to the stage where we were going to forfeit the game and turn up to Newbridge for a training session on the Saturday night, that was how mad it got but we were happy to do that, just to stand up for what we thought was right.”

He explained how the week played out.

“We heard about what was happening. We all had our own ideas about it but we never had a group chat or anything like that. Eoin Doyle put up a message in the Whatsapp group and said we had to make a decision by whenever it was, the Monday or Tuesday, are we going to go all out and say that we weren’t going to play in Croke Park and that we were going to play in Newbridge? Or was there any leeway there.

“It was just unanimous, usually when you put up in a message in the groups there’s lads who don’t reply for hours or days, but within about five minutes the whole panel wrote back to give the thumbs up to play the game in Newbridge. We were aware of the consequences if Croke Park decided to play it in Croke Park, we’d obviously forfeit the game. It was done within five minutes and that was relayed to Cian O’Neill and I think he went on the news that evening and that was it.

“Once I saw that interview, I said ‘here we go’. I knew the way he delivered it, it was perfect, the message that we giving to the whole country – ‘We are not going to give up our home advantage just because you want a few more quid, you’ve enough money’. There was a lot of nonsense around health and safety then too and the way they tried it around was just mad.

“It was a crazy game, it really was. It was like something that you’d only see a handful of times in your life, the atmosphere at that game,” said Callaghan.

The podcast covers Callaghan’s career in detail – from not making the Kildare minor team, to breaking on to Mick O’Dwyer’s senior panel, the heartbreaks of the Kieran McGeeney and the years that followed under Jason Ryan and Cian O’Neill and is well worth a listen for any Kildare supporter.