KILDARE GAA Operations Manager Cormac Kirwan explained to club delegates at tonight’s County Board meeting in the Osprey Hotel that the planned starting date of November for the much anticipated redevelopments of St Conleths Park in now ‘unrealistic’ due to the economic effects of the Covid-19 pandemic. 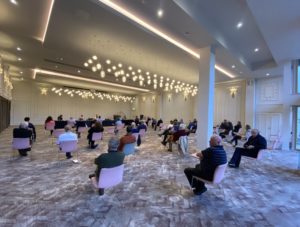 Planning permission for the project was granted in August 2018 and received a further boost in January of this year when Kildare GAA were awarded a grant of almost €5m under the Government’s Large Scale Sports Infrastructure scheme. It was hoped that work would begin in November of this year but that is now unlikely. However, dialogue continues between Kildare GAA and Croke Park and also the Government and all parties remain committed to the project.

Kirwan explained that Kildare GAA are currently working on two seperate documents for the Government in relation to the project.

First of all, a Cost/Benefit analysis.

“We are holding off until we get clarification what Croke Park will be able to provide, that’s both Croke Park and Leinster Council contributions. We are engaged with Croke Park, it was discussed very briefly at a meeting last night and we’d hope to get into them as quickly as possible. As everybody can probably appreciate with where we are with Covid we need a little more time, or they need a little more time to come back to us with a solid commitment because we are one of three major projects.

“The second thing that the Department asked for was a Multi Criteria Assessment where we identified all the options in relation to St Conleths. There were four options on the table. First option was to do nothing at all. Second option was to do minimal work, basically to meet the health and safety requirements. The third option was to do the project at a reduced scale, reduced scale means minus the floodlights, minus the pitch restoration and extension, minus the ticket booth, minus the work at the Athgarvan End and minus the Premier element of the stand. Option number four was the project that was put forward in the planning permission which includes everything I’ve mentioned there. That’s being worked upon on behalf of Kildare GAA. We are working with our consultants who are Mazars and that will go back to the Department. We’re engaging with the Department.

“Where we are at the moment is that the design team has been stood down temporarily in relation to finalising the project but the team is still active behind the scenes. We are just awaiting further clarification from Croke Park before we go any further with it but from our perspective it is still very much in our sights.

“Let’s be quite clear about it, November wouldn’t be a realistic timeline in terms of where we are nationally but we would hope that the project would commence in 2021.

“We’ve also spoken to Croke Park about if they gave a set amount of money and it could be extended over a six or seven year period that we could then look at some sort of bridging finance once we know it’s coming. Until we know what that sum is we can’t finialise the financial plan for the Department,” said Kirwan.

Paul Doyle – Suncroft – A Player Ahead Of His Time