IN his magnificent book “The Hurlers”, historian Paul Rouse muses that the first All-Ireland hurling championship “was, ultimately a triumph in that it happened at all.”

The GAA was in its infancy obviously, and basic requirements such as balls, hurls and playing gear were in short supply, getting access to grounds anything but straightforward and the competition was dogged by disputes between extreme nationalists and the organization’s more moderate members.

We have come a long way in all those aspects of course but you would still have to view the playing of any championships this year as a triumph, particularly considering the acceleration in global virus cases over the past couple of weeks even as our own numbers were thankfully declining.

It may seem churlish therefore to pick holes in the fixture-making approach of GAA Headquarters. With the understandable (though contestable) desire to finish the championships within the calendar year, there would always be compromises.

Unfortunately, though, they have created a dog’s dinner of inconsistencies, whether it is across codes between football and hurling, or within codes such as the different treatment of hurling’s elite and its lower echelons.

Kildare were not one of the five counties who took part in that first hurling championship in 1887. Those were Galway, Wexford, Kilkenny, Clare, and eventual champions Tipperary. Remarkably all remain in the top tier playing for the Liam McCarthy Cup.

Sadly, the GAA clearly has little interest in encouraging the likes of Kildare to get to that level if their approach to the autumn’s fixtures in concerned.

With the league out of the way for the Lilywhites and only divisional finals to be fixed at their level, that left the GAA with nine remaining week ends to give the inter-county hurlers at Kildare’s level some meaningful competition this year.

The original format for the Christy Ring Cup was each team playing three guaranteed group games followed by a potential semi-final and final (or alternatively a relegation play-off for the bottom two). At the end of three group games you would feel as a hurler that you have been given a good shot at the title.

Considering that the original set-up was due to be completed over eight weekends between May 8/9 and 27 June, it is hard to fathom why we have moved to a knock-out competition when there were nine weeks available for games. 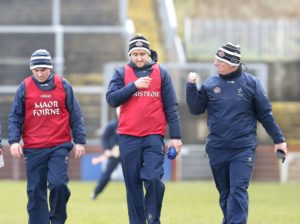 You cannot avoid the conclusion that the GAA has no time for weaker counties in either code. It is particularly hard to digest when the Liam McCarthy counties have been given a back-door route if they slip-up.

It is no wonder the welcome for the Tier 2 Táilteann Cup in football was lukewarm to say the least.

No sooner had the news of the Christy Ring format been announced than we learned Kildare were up against the competition favourites Offaly in their knock-out quarter-final.

With no league games ahead of that one it is an incredibly tough task for the team. While it was only the Kehoe Cup, I was in Birr before Christmas to watch the Faithful men destroy Kildare. It was men against boys.

Championship is another animal of course and maybe we can catch Offaly cold but the betting man would envisage Kildare’s championship being very short-lived and a quick-burst relegation battle to follow.

The footballers’ lot is better but by no means perfect. To go straight back into two crucial Division 2 relegation battles requires them to hit the ground running with no room for slip-ups.

The same applies to the Championship, inexplicably stripped back to a knock-out basis that leaves all bar two counties between Munster and Leinster (Kerry and Dublin) with a realistic chance of going anywhere. How does this make sense when the elite hurlers are allowed a back-door?

The GAA missed a trick here and it gives you no confidence that they will be any way open-minded in their approach to fixing competition structures. No imagination shown whatsoever.

I understand, without necessarily agreeing with, the desire to finish things by Christmas, but in that instance it might have been better to hold over the remaining two league games until January and allow room for a back-door competition.

Alternatively, the real opportunity was to try out a “Champions League” style All-Ireland with eight groups of four, guaranteeing all teams three championship games. Award the highest team from each province their provincial crown.

The interest in such a concept would have been huge across the country. It might not have been a success but at least try something new when the opportunity presents itself.

The footballers at least had luck on their side, having landed in the opposite side to Dublin in Friday’s rather unnecessary semi-final draw. They also have the benefit of a week’s break before playing Offaly or Carlow, who will be playing for the fourth successive weekend.

It now gives Jack O’Connor a clear view of what a good “autumn series” would look like: avoiding relegation is paramount and once that’s achieved a win against Offaly/Carlow and in the semi-final against (one assumes) Meath would set us up for 2021 on an upward curve.

After that all you can do is pray for the wettest, windiest, coldest, foggiest of November days on which to drag Dublin down in a Leinster Final up in the Big Blue House.

I did laugh at Bernard Brogan’s claim on Friday that the weather, pitches and the chance to take on Dublin will have the rest of Leinster chomping at the bit for championship, even suggesting it might be “competitive”. That is just the sort of patronising guff Jim Gavin would come out with.

In case Bernard has forgotten, Dublin won their Leinster games by an average of 19 points last summer. Kildare were walloped by 15, Meath by 16 and they are the two supposedly closest to the Dubs.

While the conditions may limit their margins a little, what about the extra freshness the break will have given a team that climbed to the five-in-a-row summit last year. Dream on!

In the meantime, let us enjoy the club scene as inter-county is rightly put on the backburner.

The Supporter column originally appeared in the edition of Tuesday 30 June 2020.

Filed under: Kildare GAA, The Supporter