THE Jessica Harrington trained Alpine Star was just pipped on the line by Fancy Blue in the Prix De Diane, the French Oaks, in Chantilly today. 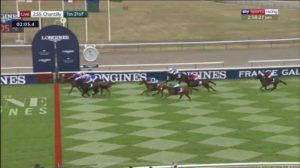 Alpine Star, a half-sister to Alpha Centaui, was a recent Group 1 winner at Royal Ascot under Frankie Dettori and here under French jockey Stephane Pasquier made all the early running alongside the rail. She was joined Fancy Blue in the closing stages who just about got up to land a first Group 1 Classic win for Donnacha O’Brien.

Peaceful, with Kildare jockey Seamie Heffernan, also finished strongly and there was barely a length between the Irish trio who were first across the line and Raabihah in fourth.