IT’S a nerve-racking day for staff at Jessica Harrington’s Commonstown Stables as they wait to see the first run of a horse that they own shares in. 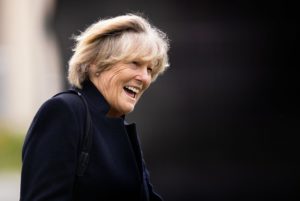 The Racing Post report that staff in the yard were given the opportunity to buy shares in two of the yearlings that were brought into their stables and the first of those, Malaysian, runs in the Irish Stallion Farms EBF Fillies Maiden at 5.55pm in Gowran Park today.

The idea came from Harrington’s son in law and assistant trainer, Richie Galway.

“It’s a great initiative if she’s a good filly – if she’s not there could be a revolution. The staff work very hard and we’d love to give them a bit of fun. Everyone has been supportive of the idea and we hope they can be rewarded.

“If the filly was to run well at Gowran there may not be anyone turning up to work the following morning! Everyone is highly excited and their two are certainly getting an extra scoop of feed every evening,” Galway is quoted as saying.

Harrington has a impressive strike rate with two-year-olds this season, following on from a brilliant year with juveniles in 2019, and Tom Madden takes the ride this evening. The current odds of 25/1 suggest that Malaysian will have her work cut out to make her mark on her debut but Harrington’s record this season means she can’t be discounted.

“She’s worked well and seems a nice, straightforward filly. We’ll be hoping she can make a good start to her career,” said Galway.