SINCE he turned professional, Eric Donovan has craved the opportunity to shine on the biggest stage. Even as one of Ireland’s most decorated amateurs, Donovan knew that he would have to pay his dues in the pro ranks but very quickly it was clear that he was far too good for the level of opponent he was facing. 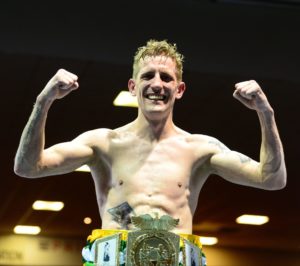 Eric Donovan is ready for the biggest pro fight of his career on 14 August live on Sky Sports
Photo: Adrian Melia

He was desperate to fight on the stage where he feels like he belongs and he finally made that breakthrough when it was confirmed last week that he will face Manchester’s Zelfra Barrett live on Sky Sports in their Fight Camp series.

“I’m delighted with the news. I’ve been looking for a breakthrough fight for a long time now. It’s after coming in the most unusual circumstances but it couldn’t have came at a better time for me,” he said.

If his things had gone to plan, he would have been in Spain this week marrying his fiancée Laura but sometimes the world works in mysterious ways and instead he is preparing for the biggest fight of his professional career.

“Me and Laura were supposed to get married on Thursday in Spain but we’ve had to postpone that until April. We were gutted over that but obviously there are far bigger things going on with the global pandemic. We are just happy to get the change of dates and get it all done without too much inconvenience,” he said.

All the hard work that Donovan put in during the sporting lockdown meant he was always ready for any opportunity that arose.

“All through the lockdown I’ve been training away. Since the beginning of March I don’t think there’s been a week that I’ve done less than five training sessions. I’m really, really fit. My new manager (Mark Dunlop) was speaking to me telling that boxing would be back soon and asking me how I was. I told him I was grand, ready, and that I was training away. He told me that because of the international flight ban British and Irish fighters are going to be needed so that I could get picked and to be ready. I told him that I am ready.

“Negotiations started with Eddie Hearn for his Fight Camp and Mark mentioned a few names to me and asked me would I be interested. I told him any of them, I’ll take them, featherweight or super featherweight. He came back with the name Zelfra Barrett and I said ‘Yes, 100%, let’s go’. I wasn’t going to just take the fight though, it had to be worth something so the fight was made on the basis that it will be a inter-continental fight or a world ranking fight or something, we are just waiting on the details of that. I didn’t have to think about it or sleep on it, I was ready to go.

“I started my camp two weeks ago and I started at 70%, I don’t have to do a camp worrying about my weight or trying to get fit. I’m just honing in on my craft now,” he said.

The fight will take place in the garden of Matchroom owner Eddie Hearn’s mansion and although there will be no supporters there, the viewing figures will open Donovan up to whole new audience. Although it will be strange to box in front of no supporters, Donovan said that most boxers’ work is done in front of empty seats.

“I’ll be fighting in front of a massive tv audience. Most of my sparring, most people’s sparring, is done in front of half a dozen or a dozen people. I think at the Fight Camp there will probably be in the region of 100 people there so there will be a bit of an atmosphere, but nothing crazy. There’s a job to do and once that bell goes I’ll be fully focused on my job.

“It’s going to be an incredible opportunity. I was buzzing when I got the news about the fight and I am still buzzing and I’ve known about it now for about three weeks. I’m loving my training sessions, loving the preparations, loving how I am doing in camp and the progression I am making,” said Donovan.

To say that he’s had ups and downs along the way before reaching this point would be an understatement but Donovan feels that everything that has happened to him has helped him into this position. “I really feel this is my destiny,” he said.

“I’ve come through an awful lot of misfortune and setbacks, some of it self inflicted and some of just hard luck. I just feel that it has all accumulated into this opportunity that is going to play out in front of all the sporting fans in the world. It’s going to be incredible viewing figures and I’m up against a good opponent and the reward for coming through his fight is going to be amazing. It is going to catapult me on to a whole new level. We’ve been talking about European title fights in the past, we could be talking about world titles after this fight. It’s just amazing. In a lot of ways when I talk about destiny, I feel like I really deserve this. A lot of times in life, even in the past I wouldn’t have felt worthy of different things on a personal level, maybe because of different things outside the ring. I feel I fully deserve this, I have worked myself to get into this position and this is my time, it’s my time to go and deliver and I will deliver,” he said.

26-year-old Barrett has been beaten only once so far in 24 professional fights and he is somebody that Sky Sports and Matchroom have high hopes for.

“It’s his first Matchroom fight and they are looking for him to step into the shoes of Scott Quigg and Anthony Crolla, two Manchester based fighters who were big ticket sellers but have now retired. They are looking at Zelfra Barrett being the next big thing in Manchester. They’ve high hopes for him but I’m sorry, he is going to come up short here. This is my breakthrough fight too. I think he will have a good career in the future but this is my time.

“Without a doubt, he is going to be the best opponent I have faced in my professional career. He has a good style, he has a good punch, he is not a bad boxer, he has a very good record and very good ranking points. He has done 12 rounds before, the most I’ve done is eight. He probably has more experience than me in the professional game but he hasn’t boxed like Eric Donovan. He hasn’t boxed anybody of my experience, my style, my abilities. I think he is going to realise he is a serious fight. Most of the fighters he has been in with in the past were used to just taking a bit of a tanking. That won’t happen to me, I understand boxing now, I’m boxing better than I ever did at the peak of my amateur career. He is going to have an unbelievable task ahead of him trying to break down me because I am just going to be absolutely immense in front of his face. The pressure I am going to put on, the speed. This is my time, I’m not just going in there to win, I’m going in there to win in style on the big stage,” he said.

Donovan will be a new name for most UK boxing fans and they will be expecting an easy night’s work for Barrett but Sky’s boxing analyst, former world champion Tony Bellew, knows Donovan from their days spent on the amateur circuit and he knows what he can do.

“Zelfra Barrett is a kid who has been plodding away in the background and I’ve heard so many good things about him. I’ve seen him a few times and I’ve always been impressed by him. I’m looking forward to seeing what he can do but make no mistake, this is not a gimme fight, Eric Donovan will come to scrap. The Irish are proud and they fight to the finish so I am looking forward to seeing it,” said Bellw.

The fight takes place on Friday 14 August and will be the third week of the Fight Camp series and it is one not to be missed.