IT has been a tumultuous period for everyone around Ireland after the outbreak of Covid-19 and the GAA Clubs in Kildare have felt the full brunt of it. 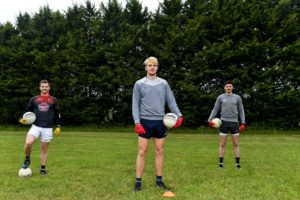 Athy players Niall Kelly, Kevin Feely and David Hyland are preparing with their team-mates ahead of a tough opening the League
Photo: Piaras Ó Mídheach/Sportsfile

After nearly four months without action the pitches reopened on 24 June and teams are slowly but surely getting back into the rhythm of things.

Athy are just one of those clubs and after getting back on the training pitch they are looking ahead to the delayed start of the Senior Football League and Championship. However, their manager Vinnie Walsh says it will take time to adapt after losing out on so much since last March.

“It’s been new for all of us and nobody saw it coming so when it did we were the same as everyone else,” said the Mayo man.

“The lads did their bit and we had a few zoom calls to keep in touch with them until they got back onto the pitch. At the start of lockdown the lads trained very hard and continued their own programmes throughout April before we gave them May off and we resumed with Zoom calls at the end of May/start of June to get the morale back as we waited for the pitches to open.

“Getting them up to speed is the big one and we aren’t rushing it as you hear the stories of when you push too hard too soon a lot of injuries can happen so we are slowly building it up with challenge games before the League starts. The lads are eager so its about managing it as Championship is just around the corner,” said Walsh.

Athy have four senior county footballers on their books in David Hyland, Kevin Feely, Niall Kelly and Paschal Connell and despite the murmurings of a club v county divide nationwide there seems to be no issue around Kildare and Walsh is full of praise for Jack O’Connor and the Kildare County Board.

“We are very lucky here in Kildare. David Hyland has been keeping me in touch with Kildare as their team captain and he’s been saying that they have been working away on their own programmes but also that Jack O’Connor is fully behind the club and the lads are with us as a result.

“It takes a huge load off them and us as a management. Jack O’Connor and the Kildare County Board are fully behind us which is excellent,” said Walsh.

It is not all rosy in the garden for Athy because former Tyrone star Cathal McCarron has returned to his home club Dromore for the rest of the year.

Taking that into account it will be a big few weeks for Athy, which begins with two very difficult league games with Sarsfields and St.Laurences.

“I think the new structure is very good as there are two nice League games before you head into the Championship and by the time the League resumes you still have a few games for lads and it won’t go on all winter.

“You could go and get ten challenge games but there is nothing better than playing the County Champions and your local neighbours in your first two games of the League to get ready for the Championship so it’s ideal really,” said Walsh.

The start of the Senior Football Championship is now less than a month away and as ever Athy will be one of the fancied teams as they aim to capture the Dermot Bourke Cup.They were last week drawn in a group with Castledermot, Clane and Monasterevan and it’s something they are really looking forward to.

“It was exciting listening to the draw last week and the open draw really added to it. We’ve a local derby up first and nobody really knows how this Championship will go and who will hit the ground running and who will be ring rusty. We just have to look after our first two League games and get as strong a team out as possible.

“The Championship this year brings a bit more pressure as there is not much wriggle room with the four groups of four, but for me that’s what Championship is about,” said Walsh.