OF all the teams affected by the Covid-19 pandemic, the Kildare ladies football team were one of the worst hit. They had already guaranteed themselves a place in the Division 3 league final, with two games to spare, when lockdown struck and the league was declared null and void.

Nevertheless, their early season marks them out as one of the teams to watch in this year’s Intermediate Football Championship. Although they were unseeded, last year’s four semi-finalists were seeded, Kildare captain Grace Clifford believes qualifying from a group containing Clare, Sligo and Laois is very much attainable for Kildare. 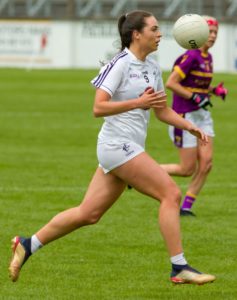 Kildare captain Grace Clifford thinks Kildare have nothing to fear after being placed in a group with Sligo, Clare and Laois
Photo: Luke Wynne

“We’re in the group with four team so we’ll get the three games at least, which is great.

“Nobody really knew what way they’d go about it and whether they would use seedings or not. I suppose it does make sense for the competition and for it to be based on last year’s Championship. It was unfortunate for us because I definitely thought we would have been in that top four but I’m happy with the draw. I think all the teams that are in our group I think we can definitely beat them. Clare are tough, they have a couple of brilliant players but I really think we can beat, people have to remember we are a totally different team this year. Even through lockdown, everybody has been buzzing and we are all just looking forward to getting back together. I think Clare are our toughest opponent but you can’t write off Sligo or Laois either. I think we are capable of beating all those team though and it’s definitely a realistic goal to get out of that group,” said Clifford.

Like the men, ladies inter-county teams aren’t allowed to come together for training until 14 September and while Clifford can understand the reasoning, she is hopeful that players who exit their club championships earlier than that will be allowed to train.

“We’re hoping that the LGFA will clarify a few things, like if your club team gets knocked out are you able to go back prior to that date. There are a lot of unanswered questions there, people don’t want to be going sneaking around the the inter-county teams, they just want answers to know where they stand. Not everybody will make a semi-final or final with their club so you have to account for that as well.

“I know it has been said a lot in the last few years that club has been playing second fiddle to county but doing it the other way around isn’t the answer either, you need to meet half way. I think the LGFA need to come out and lay out the story and people can make plans around that,” she said.

Before the return of the inter-county game, Clifford is enjoying training with her club, Eadestown.

“Our first Championship game is on the first Tuesday in August so it’s great to be back on the pitch looking forward to that. It’s great to have the dates and we all have enough time to get back into the swing of things. There’s no league but we’ll have a few challenge games to help get us to the pace before that.

“I’m really looking forward to a bit of summer football with the club. It’s something that has never really happened before and it kind of puts a different perspective on football, we’ve great numbers in Eadestown at the moment and I’m really lucky to be in that kind of set up that is being run really well. With the club everybody knows the dates of when we’ll be finished and it would just be nice to have those kind of dates for the inter-county games as well,” she said.