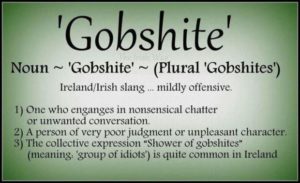 It was only a couple of weeks ago that, for the first time in its history, one of the most prestigious newspapers in the world The New York Times used that great Irish word ‘gobshite’ in an article.

But now comes word that Scrabble players are looking at banning the word ‘culchie.’

The word culchie started to take over from the word red necks, country cousin, muck spreader and bogger in the 70s. Later in the 90s the word culchie mutated into Dubchie which now refers to Dubliners who upped sticks and moved beyond the Pale and set up their homes deep in the wilds.

Indeed some people feel the word gobshite  is an affectionate term rather than an insult.

The word culchie is among a host of words that could be banned from play as they’re considered offensive or derogatory according to the North American Scrabble Players Association (NASPA).

Culchie as most people know is an Irish slang word referring to a person who comes from a rural community.

The reason why members of NASPA want to ban certain words is because they “in one more college-level dictionaries in North America and next to each word there’s a label saying what type of usage it has, such as if it’s derogatory or offensive or colloquial. Every occurrence of the word culchie – and I wasn’t even sure if I was allowed to say that word aloud – is labelled derogatory.”

Toymaker Hasbro, who own the rights to Scrabble in North America, announced that it is changing the game’s official rules “to make clear that slurs are not permissible in any form of the game.”

In a statement, they said, “Hasbro Gaming is rooted in the community and bringing people together, and we are committed to providing an experience that is inclusive and enjoyable for all.”

Hasbro said that it first started removing offensive words from the Merriam-Webster Official Scrabble Players Dictionary in 1994 and reviews the full list before each reprinting.