KILDARE have enjoyed so many great successes at underage level in the last seven or eight years ago that it is hard to pick out one game as being the best but the performance of the Under 20 team on this day in 2014 against Kerry in the All-Ireland semi-final was something special.

Enjoy again our match report from that game. 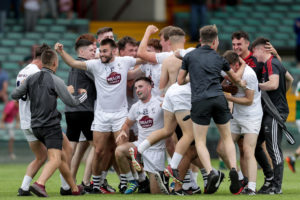 Wild celebrations among the Kildare players at the final whistle
Photo: ©INPHO/Laszlo Geczo

KILDARE’S Under 20’s turned in one of the all-time great Kildare GAA performances to beat Kerry at underage level for the first time since 1966 and qualify for the All-Ireland final at the Gaelic Grounds in Limerick.

Both sides contained almost double figures of survivors from when these two sides met in the minor All-Ireland semi-final two years ago. That day in Croke Park Kerry won by 22 points. Under the brilliant management of Davy Burke Kildare turned that result on its head.

Within an outstanding team performance, Jimmy Hyland again led the way and finished with a personal haul of 1-8, to follow on from an eight point display against Dublin in the Leinster Final. He was far from the only hero on the day for Kildare. There were more than echoes of Dermot Earley or Kevin Feely in Aaron Masterson’s magnificent midfield display. 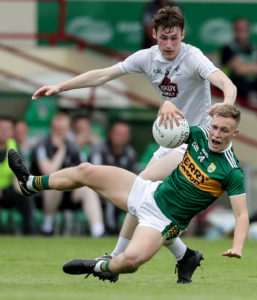 In the backline, all six defenders were again immense and goalkeeper Aaron O’Neill made a crucial save at a vital time in the first half. Up front, Brian McLoughlin got the better of the highly rated Stefan Okunbor, while the others worked their socks off. Ruadhan O’Giollain’s interception to set up Hyland’s crucial 47th minute goal summed up the on-front-foot manner in which Kildare played. 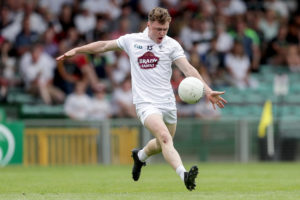 The last of Hyland’s personal haul, and Kildare’s last point of the game, came in the 54thminute and put them seven points clear but the Jack O’Connor managed Kerry came storming back into the game late on.

Substitute Michael Potts hit the Kildare net with his first touch in the 57th minute to spark an unanswered run of 1-3 for the Kingdom and leave Kildare hanging on by their fingernails but they left their comeback too late. Kildare did just about enough to regain control of the ball in the final play of the game and secure the famous win.

Despite the late drama, this was a deserved win for a Kildare side who were led from midfield by their captain Aaron Masterson. The towering 6’4 midfielder is known for his ball aerial ball winning ability but he as well as his usual display of high fielding, he gave an exhibition of kick passing. Brian McLoughlin in particular benefitted from his early and accurate delivery.

But Kildare weren’t one dimensional from their kick offs and on the occasions that Masterson was well marked, Aaron O’Neill cleverly switched the focus of his kick outs to the likes of Tony Archbold, Darragh Ryan and O’Giollain, who were all equally clever in the manner that they got themselves into free space. 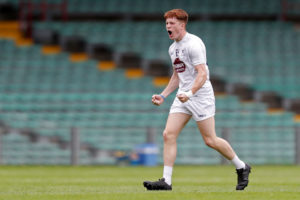 Hyland’s fifth point moved Kildare into a 0-9 to 0-5 lead in the 24 minute but Kerry finished the half strongly and a couple of Fiachra Clifford points helped them cut the gap back to one by the break.

Paddy Woodgate and Donal O’Sullivan swapped points early in the second half but in a crucial period midway through the second half, Kildare scored an unanswered 1-3. Fittingly, it was Hyland who netted the goal after 47 minutes after O’Giollain intercepted a Stefan Okunbor free kick and fed him with a pass. The goal capped an outstanding game for Hyland who proved impossible for the Kerry defence to keep out of the game.

Kildare only scored one point in the final 13 minutes of normal time plus six added minutes as Kerry came on strong but by the final whistle they were left to rue some badly taken frees earlier in the game.

This was the 20th All-Ireland semi-final that a Kildare senior, under 21 or minor team have played since the last All-Ireland glory at any of those levels way back in 1965, this was just the sixth win. Mayo on 5 August now stand between Davy Burke and his team claiming national glory and you couldn’t back against this team going all the way.