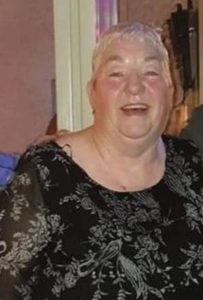 A LITTLE bit of south Kildare history was marked at the end of last month, with the retirement after 37 years of school bus driver Lucy O’Neill from Ballitore.

“Well, I finished in March because of the Covid, but officially it was at the end of June, the end of the school year,” said Lucy.

Over the years, Lucy delivered and collected generations of schoolkids from at least 10 schools from Dunlavin, Newbridge, The Curragh, Athy, Kilmead and finished up doing the run to St Lazerian’s in Carlow.

“I never kicked anyone off the bus! Although I got near it – especially when they’d douse me for my birthday!” she laughed.

“Oh yeah. They’d make up a poultice of flour and water and eggs and ketchup. They’d always get me, the gurriers! That shows the relationship I had with them,” she chuckled.

“I never lost the cool…well, there was a few in the secondary in Dunlavin, they know who they are!” she smiled.

The mother of five started with CIE in 1983 “driving the yellow submarines,” as the big school buses were colloquially known back then.

“I had a great pair of muscles between the camogie and the buses, because there was no power steering when I started out,” she declared proudly.

“I was with Gerry O’Sullivan after that, a fantastic person to work for,” said Lucy.

“I didn’t know of any other woman driving back then other than myself,” she said.

“The yellow bus was a 45-seater, and then with Gerry I was driving a 54-seater, and I used to get peculiar looks like ‘oh s**t, that’s a woman driver!’,” she chuckled.

“It’s a common occurrence now, but back then it was a bit unusual,” she admitted.

“I grew up on a farm driving tractors in Glassealy in Ballitore, and I’m still here, still on the home turf after all these years,” she declared.

“I was married in September 1983, and started driving the bus that December,” she remembered.

“The amount of people that’d say ‘howaya Lucy’, and I’d be looking at them, and they’d say ‘you drove me to school’!” she laughed.

“Oh I’d have no idea,” she said when asked how many did she think she might have transported, “but some of them would have grandchildren now!”

“There was only seven of them, but I loved them, and I will miss them. I had a great time with them,” she admitted.

“I remember I drove a load from the club [her beloved St Laurences] down to Waterville for Micko’s [Dwyer] 80th, and that was a fantastic weekend. I took her nice and slow so I could enjoy the scenery,” she said.

The club features large in her reminiscing, and Lucy played camoige “until I was a

grandmother”, retiring from the St Laurence goals at the outrageous age of 48.

“I’ll do a bit of cooking, I like my flowers and gardening, but now I can come and go as I please and not look at the clock,” she said.

“I enjoyed my time. I had five kids, and I would have drove nearly up to my due date. You only got 16 weeks maternity leave then, and you’d go back to work with the child half-reared,” she laughed.

“There could be a few stories told about that bus. We had a laugh,” she said.

“i met the kids half-way, I didn’t lay down the law, and I got on twice as well with them that way,” she declared.

“I had a great time, and I can’t complain,” she concluded.