AFTER four long months GAA teams around the country will get back to competitive action this weekend but most have back in action with training and challenge games over the last few weeks.

Kildare champions Sarsfields played a game in Laois last Sunday and this coming Saturday evening begin their League campaign with a mouth watering tie away to Athy. The return to play is not going to be a simple process though and games will have a very different to them than they did before the Covid-19 pandemic. Sarsfields captain Barry Coffey admitted it was only natural for there to be some concerns about the return but he is happy to follow the guidelines that have been set out. 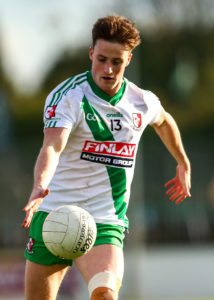 “Of course I had concerns, and I think a lot of the lads would be in the same boat. I’m living at home here with my parents who are obviously older and it’s probably the same with 60 or 70 per cent of the team. I suppose all we can do is take the guidelines from the powers that be and be as safe as we can. Once we follow the restrictions we’ve been told it will be safe and that’s the comfort that we have,” he said.

Training at their club has been very different but again, Coffey praised those who are in charge during these difficult times and says that the players are happy to adhere to all the rules in place.

“It’s very clearly marked out around Sarsfields there and there are no dressing rooms open. It’s only a matter of bringing your own water and stuff like that. It’s more with the Academy on Saturday morning when parents are dropping off kids that it gets a bit more tricky but when lads are able to drive to training on their and fill out the questionnaire, they are mature enough to look after the restrictions and I think everybody knows the severity of the situation. It’s been smooth sailing so far but we’ll see how the league games go,” he said.

“Everybody is in the same boat, just a couple of months ago it was looking fairly bleak and we were hoping that maybe next year we could get back into the swing of things. The last couple of weeks there have been crazy numbers up in the club with people looking to get back playing, there’s lads coming out of the woodwork who maybe haven’t played in a couple of years and there is a great buzz around the club. There’s a lot of people volunteering and all the guidelines are being looked after but I think everybody is on the same page and just delighted to have a small bit of normality back. Even if there is a bit of distancing involved it’s a small compromise to get the games back on the road,” he added.

On the pitch, the game against Athy on Saturday evening should let both teams know very quickly where they are standing. The lockdown has been particularly difficult for a team like Sarsfields who have a newly appointed outside manager but Coffey says Billy O’Loughlin has done all he can to get to know the players during this time.

“It’s been a tricky one and it’s been tough to gain any momentum, especially with the new management team there but there are a lot of teams in Kildare in the same boat so it’s a complaint that we can’t really have. It would be tough on Billy but in fairness to him and his management team they were on the phone during the lockdown and they were prepared as if the Championship was always going to come around, even as bleak as it looked at times. They’ve really made an effort to get to know lads and you can kind of see it starting to come together in the last few weeks.

“There’s no easy league games and we have probably one of the most competitive Championships in Ireland I would say because of the amount of high quality teams in it. Our first game is against Athy who are one of the best teams in Kildare and now they are being trained by John Doran, a man a lot us know in Sarsfields and somebody we have a lot of respect. It will be interesting to see him on the opposite sideline because I know when he was here for three years we did a lot of running and he had us in good shape so I am sure the Athy lads will be raring to go,” he said.

Coffey, who kicked that wonderful last gasp equalising score in last year’s county final draw, will captain Sarsfields this season and he says it’s a big honour to be following in the footsteps of some of the illustrious figures of the club’s past.

“It’s an honour to captain such a big club but such is the history of the club that there are all sorts of expectations to win but it’s a real honour to follow on from lads like Liam Sex, Padraig Brennan and many of the lads who are still in the squad. It’s a massive honour for myself and something that I am looking forward to doing and hopefully we’ll have a bit of success along the way,” said Coffey.

Who has the edge after Sunday’s draw?