GAA Cúl Camps ready for the off

THE Kellogg’ss GAA Cúl Camps will kick off, albeit at a reduced capacity, this coming Monday 20 July over staggered times. 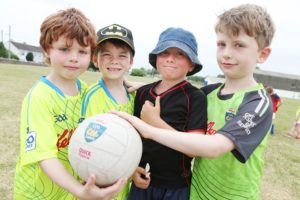 To allow for all health and safety measures, capacity at certain camp locations and venues may be reduced this year and in some instances demand for places will outstrip availability.  Early booking is strongly advised.

Kildare GAA Coach David Murphy oversees the camps throughout the county and he outlines the many changes that are involved this year as a result of the outbreak of Covid-19.

“There is no walk ins on Monday like there used to be and everyone has to book in online. The ratio of coaches to children has come down and there is a sanitation area in every camp with each parent urged to give their own children a little bottle as well,” he said.

“There will be now small groups at each camp too with ten to twelve children per coach. Each group are also assigned to a section on the pitch and they are there for the day apart from toilet breaks and things like that.

“We won’t be using dressing rooms, all the children will be having their lunch within the coaching area and they cant swap groups until the following day and the same applies to the coaches,” added Murphy.

The camps are usually the highlight of the summer for children all around Ireland but it is all change this year. Child Safety is paramount and as a result of this the camps have nearly halved in Kildare with much less participants as a result.

“132 coaches are employed but with the ratio getting smaller we are using more coaches. It’s the same pool of coaches but we are using more of them each week. On our busiest weeks that will have a big impact,” said Murphy.

The Summer Camps will be five weeks in duration once everything goes to plan but as the current Carbury selector acknowledges that could all change but with just one week to go to the first came things are going in the right direction.

“The camps will run to 21 August and a lot of schools are back the following Thursday. In these times we just don’t know what is around the corner and things could change but so far we are expecting to have five full weeks of camps which averages out as seven camps a week,” he said.

Details of the camps can be found at www.kelloggsculcamps.gaa.ie.