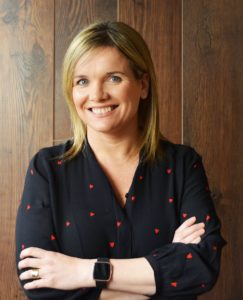 A BABY food firm – only in business five years – filled the royal flush of Irish retailing last week when it added the 167 Lidl stores nationwide to its distributions schedule.

“It’s really exciting, it is lovely to have done that, particularly after starting in your kitchen!” she said.

Her firm ‘Pipin Pear’ employ 20 people in the Maudlins Industrial Estate in Naas and a further five in HQ in her native Waterford.

However, as Ms Queally alluded to above, the journey to the shelves of the nation’s five biggest retailers started because she struggled to find a healthy meal-time alternative for her children that tasted as good as the food she made at home.

She found that while she was weaning and batch-cooking for her own children, she began to study the baby food market and questioned why there wasn’t a range available that was natural, great tasting and without a shelf life of one year and over.

A successful trial in the restaurant Irene ran with her husband Bill – No.9 Barronstrand St. in Waterford – saw parents travelling to their restaurant from all over the South East to stock up on Irene’s guilt free meals for baby, which proved to her there was a large demand for a baby food range that is just like homemade.

“It was slowly, slowly getting there,” said Irene, but she had spotted a gap in the market.

“All the baby foods in the baby aisle- beside the nappies and that – are all heavily heat-treated and have long shelf lives, not like you’d make at home,” she pointed out.

Because of its freshness ‘Pipin Pear’ food is found in the chilled aisle, alongside yoghurts, smoothies and juice.

“We’re not trying to compete with the jars…we have a natural product with a shelf-life of 30 days, but we’ve got texture, with lumps and chunks” she pointed out.

“Your sauce always tastes different from the sauce you’d get in a jar, and all the baby food available was puréed to the last, and didn’t taste very nice,” she said.

To be fair, I hadn’t massive hope for it, but people started buying it, and when people are paying for a product they’re more honest with their feedback, and then I began to think there’s something there,” said Irene.

The restaurant proved to be an excellent trialling ground that was family-friendly and “great for buggies”.

She started with a baby bowl on the menu, and very quickly had five items on the baby and toddler menu at The Barronstrand.

From here she chanced an entry in the Blás na hÉireann competition and won gold, silver and bronze awards at her first attempt.

On the back of this Ms Queally was approached by her first senior retailer Supervalu, and the success story began.

However, she has no plans to stand still, and with only 60,000 babies born in Ireland every year, she has visions of expansion.

“Last year we started in Belgium, and this year we’re hoping to sell in Germany. The next step will be in the UK. It’s all about growing the business,” said Irene.