STANDING in the way of Naas CBS as they bid for a third successive Bro. Bosco Cup is a familiar face to supporter of Kildare GAA. Luke Dempsey, back in Kildare football this year in charge of his own club Johnstownbridge, won two county two Kildare titles with Moorefield before a successful spell with St Lomans in Westmeath. 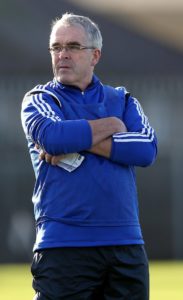 Today, he will be on the Rochfordbridge sideline and although his school are making their first appearance at this stage of the competition they are looking to continue a strong Westmeath tradition.

“Our school was a convent originally and a voluntary secondary school so now we have 400 boys but we always played up until 1995 in the ‘B’ and ‘C’ competitions and were looking on at the likes of Mullingar CBS and Marist of Athlone who were doing well,” said Dempsey.

“I then entered them into the ‘A’ and there has been ups and downs which has basically being down to the amount of lads in the school. This year has therefore been the furthest we have ever got and we are delighted to be in the final and delighted that it can go to it’s conclusion at the weekend,” said Dempsey.

Rochfordbridge are aiming to become the sixth school from the Lake County to take provincial honours but they know what it takes to achieve silverware after already landing the North Leinster League earlier in the season.

“We had some good matches against the likes of St.Pats of Navan and Colaiste Eoin in the League as well as the Championship so we got a bit of confidence from that and while we just scraped by a few teams in the Championship they are a good group,

“When they were Under 16 they won the Leinster ‘B’ Competition and depending on the quality of players in the school we have been fluctuating from ‘A’ to ‘B’ but this group have proved how good they are. They have justified that inclusion in getting to a final, albeit big underdogs,” said Dempsey.

Rochfordbridge are keen to play up to the underdogs tag and when your opponents are chasing a third title in a row why wouldn’t you but in Dempsey they have as experienced a manager you could ask for at this level.

From managing county sides to landing club titles with Moorefield and St Lomans the Johnstownbridge man knows the light of day and while he’s keen to big up Naas you get the feeling he quietly fancies an upset.

“Naas as a club have been doing great work at underage and those players have won many county titles at Under 16 and Minor and it’s a School that’s becoming like St Pats of Navan by the number of boys and the emphasis on football so it’s a great stronghold school’s wise in Kildare Football with a huge number of clubs as well as Wicklow too. The novelty in getting to the Final is great for us”.

“We were in Tullamore last weekend and they were in good form and we know we are up against it so it’s more about being delighted to be in a final representing the school and it’s just a pity there won’t be more spectators there to see it,” said Dempsey.

The match will be live streamed on the Leinster GAA YouTube page.
https://youtu.be/HkkCmYjSJPE