SIX-month statistics for horse racing and breeding in Ireland, released today by Horse Racing Ireland (HRI), illustrate the devastating impact of the Covid-19 pandemic on the industry. 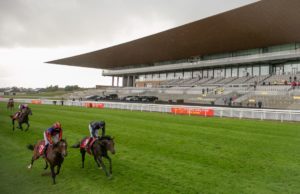 This year’s Dubai Duty Free Irish Derby was ran in front of empty stands at the Curragh
Photo: ©INPHO/Morgan Treacy

A total of 87 fixtures were lost in Ireland from March to June during the Covid-19 lockdown. Racing resumed behind closed doors on June 8 with strict protocols designed to ensure race fixtures could be run in a safe and controlled manner. Only key personnel who have completed medical screening and thermal checks are permitted on track.

Those lost race meetings – allied with the current scenario of no public attendance at all fixtures held behind closed doors – have decimated attendance figures for the first six months of the year, down almost 80%.

The bloodstock sales in the first half of 2020 experienced severe interruption, with sales either deferred or moved out of Ireland. Sales of thoroughbreds at auction in Ireland for the first six months is down 87.3% year-on-year.

The number of active owners during the first six months (i.e. those making an entry) was down by 13.9%. Since the resumption of racing, there has been an upturn in the number of horses returned in training.

The number returned at any point during the first six months was down 1.6% compared with 2019, having been up by 9.1% on March 24 when racing ceased, while the number of horses-in-training at the end of June was up 6.8%  year-on-year, reflecting the resumption of a full race programme under both codes.

With no racing attendances since early March, betting with on-course bookmakers and the Tote was down 73.9%. In April, Horse Racing Ireland announced a strategic alliance between Tote Ireland and the UK Tote Group which from early next month will provide bigger pools and a single online betting pool for Irish and UK Tote customers.

Business update from HRI Chief Executive, Brian Kavanagh:
“2020 has been a devastating year for the country and like many other sectors, the horse racing and breeding industry has suffered greatly having effectively come to a standstill on March 24. Against that background, any comparison with previous years is futile. Nevertheless, a few key points are worth highlighting.

“The absence of attendances is having a devastating impact on racecourses and the businesses that depend on them such as on-course bookmakers, Tote, caterers and so on. Horse Racing Ireland and the racecourses are working to develop methods by which attendance can return once deemed appropriate by the Government. This is challenging and the contribution to the industry by the racecourses in continuing to race behind closed doors since June 8 is commendable.

“While traditionally the quieter part of the year, bloodstock sales figures for the first half of 2020 were decimated. The sales companies have shown flexibility with regard to their dates and HRI is working with them and Government to ensure that sales can safely resume in Ireland in August. The equivalent sales of those scheduled to be held between now and the end of the year generated €150m in turnover for Irish breeders in 2019, much of it to overseas buyers.

“With the support of the Department of Agriculture, Food and the Marine, horse breeding and training were able to continue safely during the period of restrictions and owners have shown great loyalty with just a small drop in the number of horses in training. HRI is committed to restoring as many of the lost opportunities as possible and has previously announced revised fixtures and race programmes for the rest of the year which will provide opportunities for horses at all levels. I would like to acknowledge the contribution of owners, both domestic and international, in retaining their horses in training which has protected employment and economic activity in rural Ireland.

“Horse Racing Ireland welcomes the strong commitment to develop the industry over the coming years contained in the recently published Programme for Government, particularly in the context of the challenges provided by Covid-19 and Brexit. The racing and breeding industry is one which will contribute to the economic recovery, generating employment and a significant level of international investment into the Irish rural economy. Horse Racing Ireland is working with all elements of the industry to mitigate the impact of the current crisis, however, the challenges facing many participants are significant.”